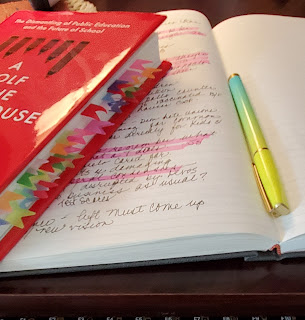 Town Hall Seattle held a three-way conversation last night, with Diane Ravitch and the authors of A Wolf at the Schoolhouse Door, Jack Schneider and Jennifer Berkshire. Best $5 I have spent...I got a ticket to listen, to watch, to take notes, to wish I could rewind and get the quotes right. It was an amazing hour for anyone who cares about public schools and the destructive reforms of the right...and the left.

These two education historians (Ravitch and Schneider), and education journalist (Berkshire) have a long view of school reform, as well as a broad view of the current legislation popping up around the country, and the connections among the efforts.

They began talking about Betsy Devos, who has a prominent position in Wolf, as, perhaps THE wolf at the door, but Schneider and Berkshire made the point that the real action, the real reform, happens at the state level. That is a lesson I've learned in the decade I've been paying close attention...

Berkshire, who crisscrosses the country as a journalist pointed out that proposed legislation at the state level is so similar. West Virginia has a bill to punish teachers for any kind of walk-out or strike. I know OK has a similar bill. So many state houses are now sitting on a GOP super-majority, and many of these legislators have identical ideologies and motivation. Choice. Vouchers. Attacks on unions. Defunding public schools. We public school advocates are facing the same attacks, no matter where we are.

Public education is the largest expenditure for every state in the union, and many on the right are obsessed with carving dollars away, to invest in their own pet projects. Even thought, as Berkshire and Schneider pointed out, over 90% of Republican parents' students as well as Democrat parents' students attend public schools.

One of the authors reminded Ravitch of one of her quotes in Reign of Error, paraphrased as, "The public good is not a consumer good." I had not initially made the connection between Ravitch's book and this until Berkshire reminded the audience of the four principles of conservative reformers:

1. Education is a personal good, not a collective one (almost the reverse of Ravitch's line!)

2. Schools belong to the domain of the free market, not the government

3. To the extent that they are able, the 'consumers' of education should pay for it themselves

4. Unions and other forms of collective power are economically inefficient and politically problematic

As I review my notes and memory, these principles really framed the conversation last night.

Berkshire pointed out that many of the conservatives who want to disrupt (my word) public schools are still angry about the New Deal...when unions grew in power and importance, and regulations complicated the free marketers. They never gave up their hatred of teachers' unions and a zealous belief that the free market is the only answer for this country in ever facet of our lives, including the solemn duty to educate every child in the nation.

Schneider and Berkshire show that the ideology of reform drives all the reforms we fight...a belief in markets, in choice, in no oversight and regulations, in breaking unions. Reformers are furious that public schools do no extoll the value of free markets...they believe teachers 'indoctrinate' students to be socialists. They reject accountability and transparency.

The three began riffing on these issues, and I wrote furiously...I'll share quotes (probably not word-for-word, but close) and phrases that reminded me so strongly why public education has my heart and soul.

Reformers degrade and defund our schools

Viewing schools as free markets creates competition...and competition creates, is grounded in, a zero-sum game. There will, by design, and deliberate actions, be winners and losers. (This year as I have listened to committee and floor discussions at the OK Capitol, I have gritted my teeth each and every year a non-educator-legislator has solemnly entoned how important competition is for schools. No. Competition ensures there will be losers. Public schools that will be losers. Children and families who will be losers!)

"There is a national myth that your education explains your station in life...this meritocracy is privilege-laundering." JS People who attend these elite, expensive schools, will succeed wherever they go...their education is not a factor.

No transparency. No oversight.

Ideologue reformers want to unmake schools...deliver a death blow...fracture us into an individualistic society.

Ravitch asked the poignant question I often wonder: "Why are they willing to destroy schools?" Why, indeed.

The conversation circled around ALEC and the Koch fingerprints on our education...

"According to Koch, schools don't prepare kids to be ardently free-market enough." JB

"Oligarchic tendencies are rampant in these ideological reformers: they think they're smarter than everyone else." JS

"This pandemic helps us remember what schools do, what a teacher does." JS

The three circled back to the difference in reform beliefs of conservatives and liberals. They all agreed that Arnie Duncan was just as harmful in his own way as Devos.

Liberal support of 'choice' gives legitimacy to the conservative war on public schools...Neo-liberal belief in choice and tests makes them just as dangerous as the ideologues who want to gut schools for their beloved free markets. They agreed that the left must come up with a new vision for our schools.

The conversation was not just a summarization of their excellent book. It was an hour with three brilliant thinkers and advocates. Fast-moving, exhilarating, and sometimes deeply depressing in the size of the task ahead of us. But they have given us the ability to understand who we're up against. It's time to come up with a new vision.

And it's this...do we as Americans see public education as a societal benefit, a collective good, a public good?

If we do, we have work to do, or we will be left as the losers in free-marketeers' zero-sum game. 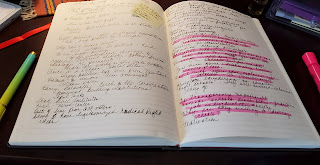 Berkshire has offered to lead a ZOOM discussion for Oklahoma advocates! I'm working on a list of interested folks. So far, parents, grandparents, educators, legislators have told me they want to be included. Let me know if you want to join us.