…the report of the death of the Teacher Caucus has been greatly exaggerated. I’m not sure who named the collective of teachers and family members who decided to run for office, but I’ll stick with this phrase. I like it. It has a ring to it. 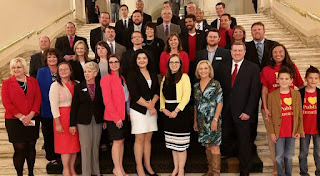 Talk about the classic David and Goliath story…incumbents, members of the machine, rich war chests, contacts, rolodexes full of names and numbers. Up against teachers and family, fed up with the neglect, sick of the disrespect. Tired of the funding cuts. Teachers and family, mostly political newcomers, some without the support of their own parties, funded by friends and neighbors, learning how to negotiate the world of politics on the fly, in real time. Inexperienced, unfunded novices. So, how did they do? Not bad at all.

There were 52 educators or family who chose to run for House of Representatives spots…19 Republicans, 32 Democrats, and one Independent.

In the House races, 20 candidates had no primary challenger and are set for their races in November. Nine won their primaries, 19 lost, and three are in run-off races next month.  One candidate who lost, Jim Beckham, was a target of the Oklahoma Federation for Children Action Fund, a pro-voucher foundation that spent big in several districts, sending almost identical attack mailers to voters in the districts. This group is headed by Jennifer Carter, former Chief of Staff for the former Superintendent, Janet Barresi, and her husband is an editorial writer for the Daily Disappointment Oklahoman.  Ironic that inexperienced, unfunded, unconnected teachers needed the big guns leveled at them.

So, 20 of the 52 candidates move on to November…and three will learn their fates in August.

In the Senate, 13 Republican educators or family members ran, 12 Democrats and one Independent.  Fifteen of the 26 candidates will be on the November ballot, with five in August run-offs.

Eight members of the “Teacher Caucus” won their elections, five lost. Of those, two candidates were victims of dark money…Jean Oliver lost her race, and Lisa Kramer is in a runoff. 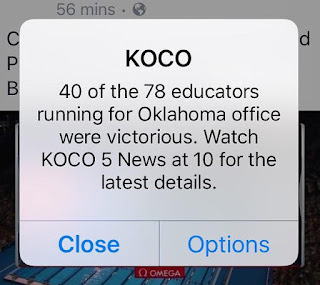 My favorite campaign story involves the two Democrats running in SD 47. Don Sherry lost, and immediately donated his remaining campaign funds to the victorious Judy Hopper. That's what educators and their family do. Support each other.

There was much crowing from one Senator who beat a teacher candidate…with dark money from OK Federation for Children. He tried to spin his 55% win as a mandate for vouchers. He conveniently forgot to tell us he only pulled in 2800 votes. Reports are that OFC paid $801 for mailers to attack his opponent…so each vote cost them $3.52. No, Senator Loveless, you did not win a mandate. You and your name recognition only garnered 2816 votes in your own district. You escaped.

So, the Teacher Caucus did take some blows, and we lost some strong educators who would have been strong legislators. But many in both parties are still alive, still campaigning, and still reminding the incumbents that we are here. We want change.

Even the candidates who lost have learned. They’ve gained valuable, important wisdom if they decide to run again. Or work on a campaign, or advocate. I started with an allusion to David and Goliath…and I’ll close with one to Don Quixiote. Some of the candidates may have tilted with some windmills, but even in defeat, they learned. It’s my guess many of them will be back, forewarned, stronger, and more determined.

Here are the updated lists of Teacher Caucus candidates...


The Teacher Caucus slate of Senate candidates is:

Voters…you have some work to do. First, find out if you have a runoff election. If you do, research your candidates and vote #oklaed. Then, get to know the candidates in your district for the general election.  Go to their meetings, email them. Find candidates you can support with your time and your money. They will need both. Be active. Be there.

Then, VOTE. Despite our hopes, turnout for the primaries was still too low. That is unacceptable. If this Teacher Caucus is taking this risk for our students, we must show up to vote.

As always, I welcome corrections!
Posted by Fourth Generation Teacher at 4:53 PM