Why Do You Vote?

“Why do you vote?” Kara Jo Perry-McKee asked us that question on the TogetherOklahoma Facebook page.

Why do you vote? For me, it's easy. And it's not so I can complain after the election. 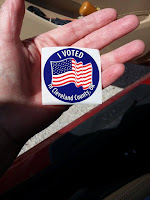 I vote because my parents would know if I didn’t. They’d come down from Heaven and yell at me. They both loved to vote, to participate. Mom was a New-Deal Democrat and Dad was an Eisenhower Republican. They joked that their votes cast each other’s out, but it didn’t matter. The act of voting was a solemn obligation, a privilege. An act of citizenship. A responsibility. After Dad retired, they spent every Election Day volunteering as poll-watchers. Mom for the Dems, Dad for the Republicans. In the same room all day, but in different corners. Thoroughly enjoying themselves.

How could I not vote with that example? My first vote was in the Presidential primary of 1968. We lived in Bloomington, IN, and as IU students, our polling place was the county courthouse. We stood in line for at least an hour with other university students…and I proudly voted for Bobby Kennedy.

I’ve always voted. I took my kids with me when I voted. I’ve registered and followed the voting rules of three states. I’ve written about my frustration with my profession…educators historically have a very poor voting record…and that frustrates me. I’ve not been polite about my frustration, I fear.

I will vote in the June 28 primary with pride…nearly fifty years of exercising my responsibility.

Primary rules and regulations can be frustrating. Indiana has a strange primary system…open, but…you are only allowed to vote for candidates running in the party you cast most of your votes in the last election…so Indiana keeps track of your voting patterns and limits you to one party. Iowa has open primaries – you declare a party when you register, but on election day, you can change your party and vote in whichever primary you choose. Here in Oklahoma, we have a closed primary, with Independents being allowed to vote in the Democratic primary.

This year, I’m frustrated that the Cleveland County races are between Republican candidates, and will be decided by Republican voters. I have strong opinions about the candidates for CC Sheriff, but I’m not allowed to participate…I will be represented by an official I was not allowed to vote for…or against.

As a Democrat (that doesn’t surprise anyone, does it??), I will only be allowed to vote in one race, for US Representative. Lucky for me a friend is running, and I will proudly vote for Christina Owen! It’s exciting to vote for a friend.

I can vote on Tuesday at my polling place, or I can vote early Friday or Saturday (I frittered today away, or I could have voted all day). I also could have voted by mail, but was initially intimidated by the requirement of getting my ballot notarized. I learned that any tag agency will notarize my mail-in ballot for free, so I may try that again.

But I will vote. Once, not ‘early and often’ like we joked in Chicago. One vote, proudly cast. For only one candidate.

There are many tools for us voters. The OK Election Board’s Online Tool allows you to type in your name and birthday (none of your business), and learn your precinct, polling place, and all elected officials. There is a link to see a sample ballot, so you can go to the polls prepared.


There are tools to help you learn more about candidates:

This is the year of the education coalition…educators and family who stepped up to run for the legislature, to risk everything to do the right thing for our students, and for #oklaed. This is the year that we all must vote for candidates who will work for our schools. We have heard that many incumbents feel no urgency from these challengers…some incumbents do not believe we will vote. We must.

Vote. If you’re my friend, vote.

Vote for candidates who are committed to our children and our schools and our communities.

Vote and confound the career politicians who do not believe we are ready for change.