I am old. That can’t come as a surprise to anyone. I’m old and I have a long memory, and I see patterns. The violence we are seeing now has been compared to the violence of 1968, but I remember longer ago than that. During my young adult years, a president was assassinated, two African American leaders were shot, a candidate for president was gunned down, and another candidate was attacked and left paralyzed. People my age began to assume that assassination was the way things were and would always be. That hideous violence by gun, taking the best and brightest away forever.

I was a freshman in college in 1963. November 22 people returned from lunch with shocked faces. Someone wandered up to a group of us and said, “Have you heard, the President has been shot.” We thought it was a sick joke. We waited for the punch line. Then a black and white television in the student lounge was turned on, and we saw. The weekend passed in a blur of images…Johnson being sworn in on Air Force One, with JFK’s body in the plane, with JFK’s widow standing next to him, bloody and dazed. The funeral courtage, the drumbeats, John John saluting his father for the last time. Potential lost.

1965 brought the assassination of Malcolm X. The image I hold in my head is the chairs upturned around his body on the stage where he was prepared to give a speech. Gunned down. Potential lost. 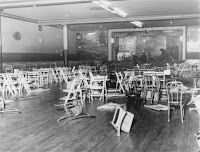 1968 was a gut-punch. In April, Martin Luther King was killed in Memphis; I have the memory of the picture of his followers standing on the balcony, point at the direction of the fatal shots. I remember that Robert Kennedy was in Indianapolis, campaigning for the IN primary and went into the inner city and broke the news to a crowd of listeners. I knew he gave a speech, but it was years later that I heard it. Every time I hear it, I am moved to tears. Potential lost.

My first vote was for RFK in that primary. We stood in line around the courthouse in Bloomington, everyone supporting his or her own candidate, but the atmosphere was positive and hopeful.

Nearly two months to the day of King’s death, Kennedy was killed. “Now on to Chicago” were his last public words. The image that haunts me is the turmoil in the back room, and his pregnant wife, Ethyl, kneeling next to him, holding his head. Potential lost.

Any student of history knows about the Democratic convention in Chicago, and Mayor Daly and the riot police. We were young, not yet parents, and we feared for our country. We feared for our leaders. We feared.

Four years later, another candidate was shot. George “Segregation now, segregation tomorrow, segregation forever” Wallace was shot at a campaign stop, and permanently paralyzed. He spent the rest of his life in a wheelchair. I would like to hope Wallace would have softened his supremacy ways and grown in potential as a humanitarian.

Not a bit of this, though, prepared me for the recent killing of young black men, and a child, at the hands of law enforcement officers…the very people entrusted to protect. Each time a new incident occurs, some immediately vilify the victim, pointing out criminal records or bad behavior, or clothing choices, as reasons the young man…or child…participated in his own death. Two more this week. Potential lost.

And then last night. A peaceful protest march turned deadly, as a sniper with cold precision murdered police officers. Not the police officers who participated in the deaths of young African American men…police officers who posed for pictures with protesters, police officers who have a positive reputation for community relations. More violence. More death. More guns. More families torn apart by another’s disregard for the lives of others. More futures lost.

I was catapulted back to that awful summer of 1968 – which, in my mind, always started in 19 63, moved through 1965, and on to 1972. One of the horrifying developments of 2016 is the 24/7 news cycle that demands new pictures, new witnesses, new interviews, new facts…or pretend facts. Now we’re bombarded with pseudo-news, inane interviews with people who have very little to say. New breaking news, news crawls, screaming talking heads.

I couldn’t sleep last night, and I can barely process today. I am back to that numb, unfocused, questioning self of 1968, just wanting to make sense.

I returned to RFK’s speech. His words give me hope and a bit of comfort.

“We can move in that direction as a country, in greater polarization -- black people amongst blacks, and white amongst whites, filled with hatred toward one another. Or we can make an effort, as Martin Luther King did, to understand, and to comprehend, and replace that violence, that stain of bloodshed that has spread across our land, with an effort to understand, compassion, and love.”

He didn’t know he would not be a part of the solution he proposed:


Kennedy is still one of my heroes, and I have hope that we can strive to be the kind of nation he envisioned:

I've seen social media posts by new moms who fear for the world their children will inherit. I've seen posts of parents of little boys who will grow up to be men of color. They fear for their sons and grandsons. My friend, Sabrina Stevens, eloquently reflects on being the mother of a mixed race son. How can she keep him safe? And strong and positive.

It’s Friday as I write this, and though I’m not as eloquent as the Kennedy brothers, my Friday Blessing is my attempt to remind my students (and former students) that we are all here for each other, and we must ‘make gentle the life of this world.”

Take care of yourself. Take care of each other. Buckle up. Hug a dad or a mother. Tell someone you love them.