"THEY WILL TELL US" Another Interim. More Questions 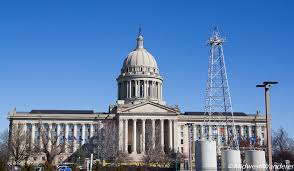 I still remember the first time I was made aware of virtual schools, computer-driven…soon after her election to State Superintendent of Public (oh, how she hated that!) Schools, Janet Barresi visited a K12 school…she came back to Oklahoma and waxed poetic about how efficient they were – with their teacher student ratio of 1:300 (OK, maybe I’m exaggerating…slightly).

So, it appears that for-profit charter schools are alive and well in #oklaed…all our virtual charters are being run for profit. What could possibly go wrong?
While these schools are classified as public schools, like other charters in our state, they are driven for profit, for the bucks, and their growth shows there is a lucrative market in our state.  They are partially funded by state school money…receiving the state aid, but not the local money…and they are hungry for more. I’ll explain below.

Emily Wendler, reporter for KOSU, the local NPR station, has written two pieces about charters…good and not so good. I recommend them both.

My reporting here may have holes, because the speakers moved so fast through slides with lots of charts and graphs…just as I had my phone up to snap a shot, we were off to the next slide. Senators at the study got spiral-bound books with all the information. Old grannies in the audience were trying to listen and take notes, and sometimes that didn’t work.

There is a state virtual schools board, with members appointed by the Governor, Senate Pro Tem, and Speaker of the House…the purpose of the Board is to bring accountability to this industry. And make no mistake, it is an industry. I believe each school also has a local board, appointed in some way.
The Interim, called by Chair Stanislawski, was to look at performance data. And we got into the weeds almost immediately.

EPIC Charter, our largest virtual charter in the state, has information about why families leave the public school setting for virtuals…some reflect negatively on schools: bullying, overcrowding, limited resources, and ‘problems’ with schools. Safety is an issue. There are also positive reasons for the transfer: more parental involvement, the ability to accelerate instruction, or receive intensive remediation, and individual needs that were not addressed in the public schools.
Parents identified benefits: safety, engagement, quality of the academics. And they identified challenges: social interaction, academic struggles, lifestyle adjustments.

My heart will always be with public schools, so I look at that list through the lens of the recent strangulation of schools…resources…overcrowded classes…teacher shortage…individual attention that every child deserves. My question from the start was, “How much of this need for an ‘alternative setting’ have we manufactured by starving our schools, and what would happen if we were fully funded?”

Virtual charters in OK are public schools—run by for-profit corporations. But like other charters, they receive only a portion of the state allotment. They do not receive local funding, or ad valorem funds, and they are not able to bond, or piggy-back on public school bond elections.  Because of the high mobility of student enrollment, virtual charters typically get large ‘mid-term adjustments’ in state funding. Virtual charters also have no brick-and-mortar upkeep, transportation costs, or child nutrition costs.

Students at virtuals are tested, just like all other charters and public schools. They must bring students to regional centers to test with the same safeguards as other schools. And scores are reported to the state.

But here’s where it got sticky, and the meeting got testy.  All (or nearly all) students in a school must be tested by state law. But for evaluation purposes, only certain student scores are counted in this evaluation…students who are identified as Full Academic Year…enrolled within the first 20 days of the school year, and not absent for 10 consecutive days up to the testing window.

EPIC folks were sharing their test data, showing that for most grades their students outperform public students…Two Senators, Smalley and Pemberton, asked pointed questions about the number of FAY students at public and virtual. A spokesperson from EPIC said he didn’t have the exact number, but it was close to the public school rate.

OSDE folks in the back were able to access the information, and it told a drastically different story. In public schools, 93% of students are considered FAY, and their scores are combined for reporting purposes. Virtual charters? The number was nowhere near that…so the spokesperson was woefully misinformed. 31% of virtual charter students are considered FAY, and their scores ‘count’ in the total. I understand that the 31% of virtual students whose scores ‘count’ are not necessarily the highest-scoring, best students…but, a comparison of 93% of one population and 31% of another cannot be accepted as a fair measure.

The Senators present, all members of the Senate Education Committee, seemed ready with their questions.

We moved on to graduation rates…also a source of great differences. EPIC Charter’s graduation rate is computed at 36%. Again, that number does not tell the whole story because of the way that number is computed. To be counted in this number, a student must be a member of a four-year cohort…beginning high school with his peers, and graduating on time four years later. This number leaves little room for family catastrophes, health issues, developmental differences, discipline. The state must count the students who entered high school and graduated four years later.

This number would be lower for a population as mobile as virtual charters. And I wanted to ask how many students entered a virtual as a freshman, but went back to a brick-and-mortar sometime during those four years. Or transferred TO a virtual, or took a year off, or, or. Or.

We understand the variables are too many to count. But that is the bar we are all judged by. Speakers spun the data in so many different directions, I , frankly, lost the thread. And Senator Stanislawski was quick to jump in and tell the group that graduations numbers are meaningless to virtual charters. Throwing shade much?

Attendance for charters has always been a big question. In public high schools, students must attend all classes all day. They’re counted absent or present for every class. If they miss 10 consecutive days in any class, they automatically lose credit in that class, and if it’s a core course, they’ll have to take the semester over.

For charters, the requirements are different…I think it used to be a requirement that students ‘log on’ each day to be counted as present. One log-in any time during the day. Speakers shared that now students must complete 40 instructional activities in a nine-weeks to be considered ‘present’.  In Norman Schools, high school students would take 6 classes, and teachers were required to log two grades each week. 18 as a minimum for the quarter. Times 6 classes…

Another way virtual charter students can be considered present is to complete instructional activities (I assume that means at least one activity) for 90% of the school days.

There was an exchange between the CEO of EPIC and Senators over funding. No charter in #oklaed receives local money. I can see with virtuals it would be hard to apportion local property taxes to schools that serve students from all over the state. Didn’t stop them from pushing again.  Dr. Chaney is not happy that virtual charters do not receive the same amount of funding as brick-and-mortar public schools…his voice shook as he talked about ‘return on investment,’ with a chart and an emotional line: “Are virtual students worth less?” Since we have no view of his for-profit management, we must ask him, and no one did, “How much are you paying yourself, where is the accountability for public funds the state HAS given you to educate these students? Are funds being invested in students or in your for-profit management?”

This is when Chairman Stanislawski said “They (public schools) will tell us (virtual charters)…” I was highly troubled by his aligning himself with virtuals, against public schools…the public schools he’s responsible for overseeing and shepherding…crafting and advancing legislation to protect and strengthen. I know he’s deeply involved in the virtual charter world, but he seemed, in that one line, to make his loyalty clear.

At that point, I might have written a bad word in my notes….not sure.

Interims are previews of possible legislation…so, I’m predicting we’ll be seeing bills to change the funding formula for virtuals…and even loosen regulations. Last Session there was a bill to allow charters to share in public school bonding capacity, and I expect we’ll see that again. And judging from the informed questions from other Senators, I wouldn’t be surprised to see legislation requiring more accountability and transparency.

I have friends who work for virtual charters…they pay infinitely better, and offer bonuses. I do not blame them for choosing to make a living in the profession they love. I have friends who are using the flexibility of virtual charter to educate their children. I do not begrudge them that choice for their children.  For some students this is the best setting for them.  And there is funding available for families to help with extra-curricular activities. One cheer team advertised that they are now a vendor and accept those funds.

But there are issues with virtuals that must be addressed: lack of transparency, recruiting bonuses, mobility, attendance, graduation…

In a perfect world brick-and-mortar public schools would be fully funded, with an accomplished teacher certified in the subject in every classroom, with all the resources and texts and technology needed to educate our children.  There would be public school options – blended learning, emphasis on arts, music, humanities, STEM and STEAM. Flexible hours for students. When those conditions are not met, and other alternatives are offered, it’s no wonder we’ve set up this conflict. In a perfect world, face-to-face classes, virtual classes, would be available to all our students…and we’d make all our decisions based on what’s best for this child now?

We are not there yet.

And, Senator S, you tried to ‘razzle-dazzle’ us. Didn’t work.

Posted by Fourth Generation Teacher at 9:54 AM