I spent 20 years watching Romeo and Juliet self-destruct and take everyone with them. My students memorized speeches from the ‘Balcony Scene,’ and I have no doubt some of them could still quote lines.

So, as we discussed the recent Standards squabble and the strange involvement of a group, ROPE,  who encourages member to withdraw from public schools and home school, my friend Rick Cobb (another English teacher), threw out a line: “A ROPE by any other name…” I LOLed.


“A ROPE by any other name would smell as…fishy…suspicious…self-serving…(I know! Those last two are not smells exactly…but, man, the line works).

“What's in a name? that which we call a rose By any other name would smell as sweet; So Romeo would, were he not Romeo called, retain that dear perfection which he owes without that title.”

Dear perfection? Not our ROPE…but there is a sick fascination about a group that seems to wield power over a public institution it appears to hate.  There is a single-mindedness and sense of mission about them.

What’s up with ROPE? I remember when they were “Restore Oklahoma Public Education”…I even joined their FB group when that was their name. I trusted that they truly wanted to restore the best of public education back to Oklahoma. I was quickly disabused of that idealistic notion, and tip-toed out of the group to let them continue school-bashing in their own comfortable echo chamber.

Later, ROPE came clean – public education is not a priority…Now they’re “Restore Oklahoma Parent Empowerment “ (starting to really hate that word – nothing good happens with it). Now ROPE goes its merry way, jabbing our schools and collecting legislator friends along the way.

Ask ROPE and they will tell you they are personally responsible for the fall of Common Core in Oklahoma. If so, they left us, with HB 3399, a stinky pile of something…two provisions in the bill were planted to give schools trouble, and they have.

Oklahoma was charged to write our own Standards…AND they could not resemble CCSS in any way. Educators knew this was a trap. Standards is Standards is Standards. As I’ve been saying, there are just so many ways to express, “Students will recognize and identify a simile.” CCSS did not invent their standards…they built them from others. So, when our expert educators (more on them in a moment) came together and began crafting our new Standards, there would be reflections of all the standards ever written by educators. There had to be. These are the bedrock of teaching and learning: guideposts, targets, to keep our work on focus.

The other trap in HB3399 was the requirement that the legislature would have final approval of the Standards. Not educators. Politicians. What could possibly go wrong?

So, experts were assembled and Standards were written.  All along the way citizens could comment on the Standards.

In preparation for presenting Standards to the legislature, OSDE assembled evidence of rigor, documented the differences between Standards and CCSS, collected letters of support from OTHER experts, and generally worked in a professional manner to give legislators all the information they would need to understand a complicated process that is outside their realm of expertise. Their presentation took place on the first day of the new Session…they were ready to go.

Then we waited. The legislature could approve with a Joint Resolution, or they could simply wait until March 23, and the Standards would be automatically adopted. We waited.

In every meeting with my Representative, Scott Martin, he identified Standards as his top legislative priority…he showed me the materials OSDE created to help them make an informed decision. He has worked this whole Session to get this done.

Then, this week. Hours after educators and parents and children descended on the Capitol Tuesday morning. Representative Sykes hosted a presentation of his own…put on by Heartland Institute, with clear, strong ties back to ALEC. He had two experts who (insert gasp here) disapproved of the Standards. They ripped, they shredded. They created doubt and confusion.

The literacy expert told legislators that our Standards were inferior because we had no exemplar texts…A word about exemplars…they are the texts that would be required for all teachers to teach. That makes our Standards move into curriculum…and Standards must not be curriculum. This is not the first time she’s muddied the waters, or the first time she was wrong. Oh, and about exemplars? CCSS has them…and we were required to write Standards which were in no way, shape, or manner, similar to CCSS…attacked for not mirroring the hated CCSS. My head hurts.

Hours later, ROPE began a public attack… a blog post ready to go, slick links with snappy titles like “They’re Baaaack” warned us that CCSS was sneaking back into our state…that the Standards were a nefarious attempt to circumvent the law. Those pesky teachers didn’t have control over their work…or they were lackeys of Governor Fallin, or they were.

Then, the very next morning, an editorial, listing all the shortcomings of the Standards, showed up on the pages of the Daily Disappointment Oklahoman. By the leader of ROPE.

Remember, ROPE is not supporting public education, the only entity in the state that will be required to follow the Standards. So, a valid question has to be, “Hey, ROPE, what’s your real agenda?” Not public schools or our public school kids. 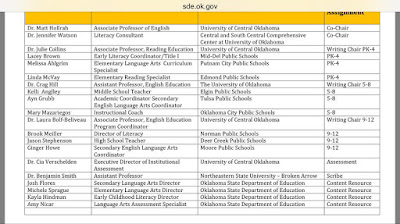 Back to those Standards. I checked the list of authors, and am duly impressed. Among the names are two teacher-leaders I have watched since their first days in the classroom. Now they are helping craft policy. Among the names are two professors whose children I had in my own classes…professors I’ve watched participate with K-12 education, and teacher preparation. One woman and I attended National Council of Teacher of Education national conferences. One I met through Oklahoma Writing Project, and has shepherded scores of teachers through a challenging month of professional and personal growth. At least two are educators I know online, whose leadership is important to our state. I see a good mix of higher education and K-12. I see early elementary literacy specialists and secondary ELA teachers. I see Oklahomans who stepped up, worked together, and did the job we asked. They wrote a new set of Standards.

Now, ROPE, whose leader is clear about the fact she did not read them…didn’t even review them…knows best for public schools in Oklahoma. Schools with whom she has no connection or affiliation. Schools she needs to allow to do their own work. 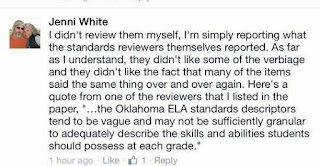 Or do I trust ROPE and its leader…a person who said she not read the Standards (hey – if she didn’t read them, how can she write an editorial slamming them?), who listened to other enemies of the Standards? A person who is not affiliated with public education? Who shows every indication that she is quite hostile to public education and public school educators?

The answer is clear…

A ROPE by any other name still stinks to high heaven.

Posted by Fourth Generation Teacher at 10:27 AM