Bernitha and Me -- a short from when I was short

A short blog post about a time when I was shorter.

I was a child of divorce long before it was part of the lexicon for kids in elementary school. By the time I was in third grade, my mom had married and divorced my father and a stepfather. Each time she returned with kids in tow to HER mother, a scary force I called “Kitty”. Kitty worked her entire life and was afraid having a half-grown female calling her “Grandma” would seal her fate, so she lied about her age until the day she died…but I digress.

Mom returned to Kitty’s house, now with two daughters, and no visible income. She got a job and had to arrange for daycare (another nearly-unheard-of phenomenon in the early 1950’s). She found a woman who would keep my sister and me during the day: Bernitha.

I think she had kids of her own, but I can’t remember…like all childhood memories, mine are vague and selective. I do remember getting chicken pox and lying on Bernitha’s couch, itching. I remember the rule that we couldn’t go outside on summer mornings until the dew had dried…and once we went out, we were to stay out until lunch. Lunch was not nutritious at all: Sugar Buddies! White bread spread with margarine, then sprinkled with white sugar. To keep the sugar from falling all over the table, we quickly folded the bread into a sandwich and ate. I cannot remember ever eating protein at Bernitha’s house. 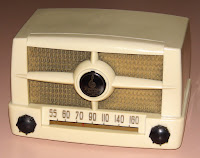 But what I remember mostly is the music that filled Bernitha’s home…we called it ‘Hillbilly’ music…twangy voices and twangy guitars in equal measure. Pumping from her plastic table radio. All day. Every day. Bernitha often sang along, and in self-defense, I did too. Mom was not amused.

The first time I heard Patsy Cline in the 1960’s after Mom remarried Daddy (the dream of every child of divorce…and I lived it!), I was taken back to Bernitha’s hot, crowded, dark, living room and that tinny music. This was the sound I remember, even though I couldn’t tell you ONE recording artist I heard at her house. But Cline’s raw emotional voice was similar to the ones that created the soundtrack of my middle childhood years.

Since I’m NOT a country fan, I seldom listen or watch current artists, but a recent YouTube video of  LeeAnn Rimes channeling Cline in a recent tribute stopped me, as those powerful childhood memories can do. I listened and found I had tears in my eyes, thinking about that hard time in our lives, and the gruff woman who didn’t necessarily nurture me, but treated me with decency and didn’t make me feel different…tainted…because of the circumstances of my life.

I would tell my students about my childhood, and the extraordinary good luck to see my parents reunited after their years apart. I could see the shock in kids’ eyes to think this old woman also survived divorce. And hillbilly music and Sugar Buddies and Bernitha.
Posted by Fourth Generation Teacher at 12:34 PM