Legacy -- Teaching and of Alzheimer's

I read a beautiful tribute to Glen Campbell, who is currently drifting into the black hole of Alzheimer's. Granger Meador used Campbell's last song, "I Won't Miss You," to examine all the way Campbell will be missed. I remembered this piece I'd written, but not acknowledged my dad's own struggle with this ravaging disease.

I was named to atone…not for a sin; but for a  profound, accidental sadness.

“Well, I’ll be damned.” My grandfather got up, didn’t say another word, and stomped—limped—into the barn.

This was the only time my mother—his daughter-in-law—ever heard him curse. It started innocently enough.

Mama, eight-and-a-half months pregnant with me, was entertaining her still-new family with a book of baby names. My three aunts were visiting from their nearby homes. Mama had recently arrived at the small southern farm, not-so-fresh from a long train trip starting in . World War II was winding down, and Daddy was on leave to wait for the birth of his first child. Being the center of attention made her feel accepted and cared for.

“What does my name mean?”

“Mary: Hebrew. The perfect one.” Mama.

Grandpa wanted to know, too. Mama, eager to please, to make a positive impression, looked it up. Her face tightened, she reluctantly read.

“Claude: Latin. The lame one.”

You see, when Grandpa was a child, his doctor-father wasn’t able to save his beloved son from polio. From an early age, Grandpa limped noticeably, visibly weak on one side. Granted, it didn’t stop him from having a full life: farmer, teacher (math…I did not inherit his strengths there), basketball coach. It was , after all, a basketball crazy state, and his drag-and-shuffle walk did not affect his ability to think and teach and direct young people.

This ‘hitch in his gitalong’ never stopped him from achieving and he pushed himself to excel.  Father, son, grandfather. Husband of a teacher, my father’s high school principal. Local legend.

The silence lengthened. No one looked at anyone else. Grandpa had pushed himself up out of his chair. “Well, I’ll be damned.” An hour later, he returned; a fragile peace settled over the farmhouse. The book was put away, never to be spoken of again.

My fate was sealed:  “Claudia—Latin. Diminutive of Claude. The lame one. Wife of Pontius Pilate.”

Fifty five years later I visited my parents in their nursing home, just a few miles from that same farmhouse.

Daddy had retired from education, like his parents before him. He was my junior high principal. Grandma and Grandpa had been gone for years. The farm had been sold out of the family. My parents’ lives had been distilled to what fit into their double-occupancy hospital room.

His diagnosis of early-onset Alzheimer's frightened us all...this man loved to read, to learn. How horribly cruel that he would slowly lose that which he valued the most: wisdom. He would often ask me three or four times in a phone conversation, "Now, have you thought about when you might retire?" I would answer him, every time. He knew he was losing his short-term memories. We all know it could get much worse. His mother had died of Alzheimer's related causes, in the very nursing home that was Mom's and Dad's home. His older sister, Alyce, was down the hall, also with Alzheimer's.

The family legacy includes a mission to teach and to learn, and a hideous disease that takes memories away.

On that last visit, I had a rental car, and we decided to go on a day trip to let Daddy point out his favorite haunts: his first girlfriend’s home; his grandmother's home, now owned by my cousin; the corn fields that had changed very little from the time Daddy was a boy. We laughed together as Mama pretended to be jealous. Long-term memories were strong.

We ended up in a tiny settlement on the . The heat wilted us. Getting out of the car, we looked over the bluffs across the river. Bandstand and park echoed a slower, more genteel past.

Mama, petulant and hungry, wanted a BLT. Daddy and I knew that look, and understood we had to get her fed quickly. We found a shop—a combination grocery store, bait shop, and coffee house, style. The hardwood floor had been oiled and swept for countless years; the dusty stock on the shelves looked as old as the floor.

Mama chowed down on her sandwich; Daddy drank sludge, self-serve from the community coffee pot. He smiled and nodded, as was his way, to the local folks all crowded around a battered Formica table in another corner.

One of the regulars separated himself from his buddies and sauntered over…sauntering as only an 80-something-year-old man can. He stopped in front of Daddy and stuck out his hand.

“You’re C.B. Lisman’s son, right? You look just like him. He was my Algebra teacher. He was the best teacher I had.”

The men realized they went to within years of each other, Daddy the younger. The other man still remembered Grandpa’s influences, his patience, his leadership. They reminisced about graduating with a class of five, seven. They caught up with old classmates.

They remembered a beloved teacher—as a mentor and as a father. I sat back and smiled, remembering the times Daddy and I had been stopped on the street by his former students, adults with their own families, people who wanted me to know how he had touched their lives. Now Daddy heard the same magic about his father.

Mama looked up from her BLT, wiping Miracle Whip off her chin, to pipe in, pointing to me.


“She was named after C.B. Her name is Claudia. She’s a teacher, too.”


Grandpa, I hope you’re proud. For years you and Daddy looked down on my classroom. Dad's high school diploma from New Lebanon High School has Grandpa's strong signature on the top left. Both these men kept me company as I taught kids who looked very different from their own students, but had the same needs. Three generations taught together every day. 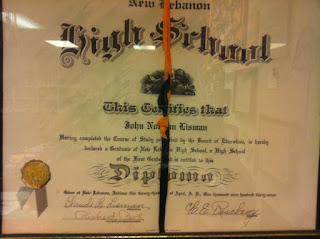 My dad died suddenly, of a heart attack, when the Alzheimer's was not the defining element of his days. He met one of his four beautiful great-granddaughters. He loved his days, he remembered his past, but he still would ask me often when I might retire.

Someday I'll be grateful he died of that heart attack, that he escaped from the indignities of losing his memories, his abilities to communicate, his teaching self.