Tomorrow, March 19, is the deadline for public comments about the Oklahoma Grading System for Schools. I will attend the public hearing and deliver a copy of this response. I will also email copies to the Education Committees of the OK House and Senate.
I am responding to the Rules for A-F Report Cards for Oklahoma schools. Unlike other responders who seem to accept the value of high stakes standardized tests being mis-used for this process, I am going to tell you the entire premise of the Report Cards is horribly flawed.
Standardized tests were never designed to retain students in third grade, evaluate teachers, or grade schools and school districts. Standardized tests are designed to give a snapshot of achievement, not even learning. That is all. Any other use of standardized tests is either naïve or cynical abuse of the data.
NCLB is tottering on the edge because of reliance on test data and imposition of high stakes to that data. The ACE requirement forcing students to pass four of the seven EOI tests is about to crumble now that we’re facing our first class of students, some of whom will not graduate. Now, despite this evidence of the flawed nature of using test data to make high-stakes decisions, the state of Oklahoma is going to do it again – to retain third graders, to evaluate teachers, and here, to grade schools.
I often tell my students to create a word cloud of their essays and other writings to ‘see’ the work in a new way. Word clouds analyze the writing and reassemble the most-used words, assigning sizes to the highest-frequency words. A word cloud allows the writer and others to understand what is truly valued in a piece of writing…values shine through the words.
When I created a word cloud of the Rules for A-F Report Card, and then analyzed the synonyms for the word “test” I discovered the values of this legislation: testing, testing, more testing and more testing. Pure and simple. Schools will now join third graders and teachers in being beaten up for test results. Remember, using standardized test data for high-stakes purposes is a mis-use of the data. 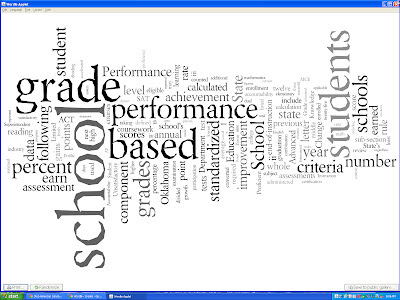 In alphabetical order, the following synonyms for ‘test’ or words connected to analysis of tests appear. Achievement, ACT, advanced, AP, assessment, assessments, average, calculation, data, end-of-instruction, examination, exams, growth, improvement, performance, performance, points, points, proficiency, proficient, SAT, satisfactory, scores, scores, standardized, tests, unsatisfactory. Value-laden words that only measure performance on one test, one day in April.
If you look again at the word cloud, look for what’s not there…what words are missing? If they are in the original document, they did not occur in enough frequency to be included in the cloud: citizens, civic, community, engaged, ethical, fiscal, global, goals, independent, individualized, innovative, parents. “Learning” is there, but I fear it’s learning to the test, not learning for life.
Despite the words of Superintendent Barresi that this law is designed to bring transparency to the analysis of school success, I firmly believe it is designed to label as many schools as failing as possible, in the shortest amount of time. She wants parents to know ‘how their children’s schools rank,’ she says. Parents know how their schools perform, much better than someone at the SDE would know. Parents are in the classrooms, in contact with their teachers and main offices.
The transparency needed with these rules is in the motivation of the SDE. It seems to me there is nothing in these rules about support for schools, for help…only labeling and punishing. Why would our own SDE want to label and punish schools? Why, indeed.
We are going down the wrong path – again. We are forcing standardized test results to accomplish something for which they were not designed – again. We are planning punitive high-stakes results without the supportive environment to create sustained change – again.
I’ll let others address the details of the Rules, talking about percentages of attendance, and muddy language and the rest. I don’t understand the ‘big picture’ ramifications to speak to them. I whole-heartedly disagree with the entire belief system inherent in this document.
I call for that same transparency Superintendent Barresi wants to impose on schools. I call for the SDE to tell us why they think more high stakes will create anything other than the chaos of NCLB and ACE…and soon, the 3rd grade flunk law.
For someone wanting to learn about schools and testing and accountability, I highly recommend the book Myths of Standardized Tests Why They Don’t Mean What You Think They Mean, by Phillip Harris. Also, Drive by Daniel Pink, Catching Up or Leading the Way: American Education in The Age of Globalization by Zhao Yong, and Wasting Minds: Why Our Education System is Failing And What We Can Do About It by Ronald Wolk.
I feel like Cassandra, the ancient Trojan princess. She was given the gift of prophecy by Apollo, but then cursed to never be believed. She clearly warned her people of future dangers and was ignored every time.  Here I am, near the end of a very long career in the classroom, warning those who choose to ignore.
NCLB’s high-stakes provisions did not work. ACE’s high-stakes provisions are about to prove they didn’t work. The 3rd grade law will prove it doesn’t work. The teacher evaluation instrument will not work. This grading system will not work…unless the true motivation is to destroy public education and sell it, piece by piece, to greedy corporations, ‘partners’ who will take Oklahoma dollars back to Virginia, leaving our state and our children poorer.
So, some transparency: what is the motivation to impose this system on our schools?
Posted by Fourth Generation Teacher at 5:45 PM