Today, I visited with a mother who lost her daughter, my former student.

Tomorrow, I will attend the funeral of that young woman I’ve loved for nearly half of her short life.

How are these all connected? They are. 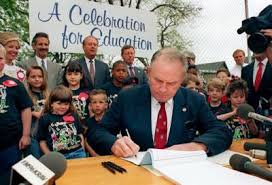 One of the Interim Studies by Representative Chad Caldwell, (R, House District 40, Garfield County) looked at both the funding and the reforms of a landmark bill, HB1017, passed in 1990. The bill provided substantial raises for teachers, and required access to early childhood programs. It also created a mechanism for school consolidation, as well as requiring state standards for Oklahoma schools, reducing class sizes, K-12, and added more testing for accountability.

This bill was a bipartisan effort, signed by Henry Bellmon, R. Repeals were attempted, and failed. But the aftermath of HB1017 was a State Question that now requires a vote of ¾ of the House and Senate to raise any taxes. Since that time, our Legislature has repeatedly reduced taxes, but had not, since this bill, raised taxes for schools until 2018's Session’s funding (and Walk-Out) drama that resulted in raises and a small increase in our per-pupil expenditure.

The first Study, hosted by member Caldwell, one of the few non-educators on the Common Education Committee, purported to investigate the reforms of 1017 – consolidation and class sizes among other issues. In a far-ranging Study, speakers touched on the reforms required by the bill. They talked about a provision of the bill that never were fully implemented that dealt with incentive payment to teachers for professional development and leadership.

Rep. Caldwell does not seem to be a fan of traditional teacher programs. He inspired others to drag out calculators to add the current number of emergencies to the number we had heard would be approved today by the Oklahoma State School Board. The argument ended in a draw. But he berated traditional teacher preparation with a story. He talked about a dinner he had recently attended with “7 or 8 teachers.” He asked how many of them felt their teacher preparation programs really prepared them to teach. He told us, with great solemnity, that not one said their training prepared them.

Neither did teacher preparation really get me ready for being the sole responsibility, in 1967, of the health, welfare, and learning of 24 sixth-graders all day. Or how to learn from a principal who didn’t care about anything but his own reputation. Or how to teach geography out of books that highlighted countries that no longer existed the year I taught. Or how to respond when one of my farm-reared students brought a pet white rat to class. Or, later in the spring when someone else brought a snake in a Mason jar. On-the-job learning went into high gear that year, and every year since.

So, Representative Caldwell used this anecdote to dismiss the necessity of a trained educator in each classroom…because he asked several teachers if their academic training totally prepared them. This story served his purpose.

Later in the same study, the focus shifted to class size, one of the jewels of HB1017. Before deregulations by subsequent legislatures, my high school classes were to be capped at 120 students a day. Not at all unreasonable for five sections a day. Limits were even more strict at early childhood and elementary levels. We were so proud of those limits. We saw them as acknowledgement of the professionalism and effectiveness of educators. When I retired in 2013, long after these deregulations had become the norm, I saw 160 students a day.

Representative Caldwell expressed his frustration with all the anecdotal stories about how smaller class sizes are beneficial to learning, and suggested that larger classes could lead to students learning more from each other. He dismissed the ‘one study’ ‘everyone’ quotes to support smaller class sizes, and waxed poetic about other studies that showed no benefits for smaller classes. Made me think of Bill Gates’ suggestion that ‘master teachers’ could teach huge classes because…they were masters.

So stories when they support his own opinions, and dismissal of stories and demands for studies (and dismissal of research that conflicts with his opinions) when that fits his point of view. The about-face was frustrating to watch and not have an opportunity to comment. While Rep. Caldwell appeared curmudgeonly at his own Study, I was feeling decidedly grumpy sitting and listening.

I find Interim Studies informative.  I learn what legislation might be coming, or what legislation might face strong opposition. I can predict, based on yesterday’s meeting, that Rep. Caldwell will fight any legislation that would require traditional teacher training and halt our state’s reliance on emergency certification. He will not be a fan of any incentivization of traditional teacher preparation (the subject of a later Interim Study). I can predict he will fight any legislation that would reinstate smaller class sizes. He wants longer school days. He appears happy with out Reading Sufficiency Act, which requires all third graders to read ‘at level’ to become fourth graders. All this information is good to know.

Tomorrow I will attend the funeral of a former student and hope I can comfort her mother and her brothers, never having been trained in my traditional teacher preparation program to do that. Tomorrow my friends in classrooms will hear stories of neglect and abuse. They will deal with behavior stemming from adverse childhood experiences and trauma. They will find a way to connect Macbeth with their students’ lives. They will defuse violent outbursts by students who have no coping strategies. They will sponsor co-curricular clubs and activities. They will consult and collaborate. They will participate in meetings where they create relevant curriculum. All these were never covered in modules of our traditional teacher training. But that training taught us to be responsive, creative, collaborative. That training gave us tools and resources and allies in our work.

As frustrated as I was in that Study yesterday, I felt sorry for Rep Caldwell, showing his disdain and antipathy for educators and our world. He doesn’t get it. He could, if he opened himself to doing more than talk to teachers at dinner. If he combined empirical research with observations and insights. If he trusted educators as the professionals we are. If he spent a day, a week, shadowing a teacher in his district. Did cafeteria and recess duty, went with a teacher to a football game, attended an advisory meeting. Came with me to the funeral I’m attending tomorrow.

He could learn a lot…by watching us learn, day-by-day, to do this job. Always learning.