"How to Talk to Your Legislator": Guest blog by Brendan Jarvis

I often brag about having smart friends, because it's true. My friend Brendan was posting a series of pieces on FaceBook about how to talk to legislators, and how to answer some of their favorite attacks on public schools. I begged him to combine them all into one post that I could publish for us all to share.
In OK, we are going into a special session next week, supposedly to find new revenue to fund our state, and to fund teacher raises. That may or may not happen. But, if you find yourself visiting with a policy maker, and they fall into any of these conversations, Brendan has supplied your non-confrontational, professional, fact-filled responses. I thank Brendan, and you should, too! BTW -- lobbying photos are with very friendly legislators would NEVER talk to constituents like Brendan's fictional one. 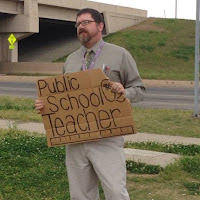 "You are a teacher.  You are embarrassed that your friend from overseas shared an article with you about Oklahoma, your home state, refusing to fund core services such as education and health care.  You have seen teachers in your school quit teaching when they had babies because their salary does not justify paying for day care so they might as well stay home.  You have seen teachers leave for other professions and other states.  You have been encouraged to speak to your legislators about the problem, but are not sure how.  You decide to try, and make an appointment to talk to the elected state representative from your district.

You:  I would like to talk to you about the education funding problem in Oklahoma.

You:  That includes federal dollars for federal programs and cannot be used for teacher salaries and textbooks. It is your job to fund those things.  Funding is lower per pupil than it was in 2008.


Legislator: Education accounts for more than half of state government spending. You: That is because you have cut so many government services that education is the biggest piece in a smaller pie even after cuts. Districts don't meet payroll with percentages, they need more dollars.

Legislator: Your district seems to be doing fine, look at your athletic facilities.

You: Facilities are funded with local bond money; our community decides to invest in our kids in an election every year.

Legislator: Look at all the free meals you provide.

You: That money comes from the federal government. Our nation decided that kids should not go hungry at school many years ago.

Legislator: So why don't you just pay teachers more?

You: Most of the money that goes to teacher pay is allocated by the state legislature. That funding has been cut by over $48 million while enrollment has gone up by 8,000 students.


Legislator: The funding formula is so complicated. How are we supposed to fix education funding when nobody understands how it works?

You: You don't have to know exactly how an engine works to know that you have to put gas in it.

Legislator: So why don't we just make it so local districts can use bond money to pay teachers?

You: Well, that would cause several problems. First, it would cause further inequities between districts who benefit from high property values and those that don't, and make it even more difficult for many districts to retain teachers. Second, it would place a further tax burden on homeowners and renters by raising their housing costs, and would force people to weigh their household budget against the education of their children.

Legislator:  Administration wastes the money we give schools to line their own pockets.

You:  There is already a law concerning administration costs.  It caps the amount that can be used for that purpose.  In fact, at under 3.6%, administrative costs are lower state-wide than what is legally required.  Of course there may be individual examples of waste in districts.  That is a local school  board issue and can be dealt with at that level, in keeping with the conservative principals of local control and limited government.  As a legislator, you should be most concerned with the overall numbers.

Legislator:  We have too many school districts.  If we force rural districts to consolidate, we will have fewer superintendents and we can pay for teacher raises.

You:  Again, administrative costs are only at 3.6%.  Consolidation will not save much if anything and will give people false hope the way the lottery did.  In ten years, people will be saying, “wasn’t consolidation supposed to fix this?”   You do bring up a good argument against charter schools, though.

Legislator:  Schools need to be run more efficiently.   We the legislature will audit and oversee the administration of schools.

You:  You mean the same legislature that has been featured in state, national, and international news for its lack of problem solving skills?  No thanks, I would rather have communities control who runs their local schools.   Again, that’s good argument against vouchers/ESA’s, as they lack accountability measures for the schools receiving funds.

Legislator: Then how are neighboring states managing to pay teachers more than we do?

You: They have a higher Gross Production Tax on oil wells and/or higher state income tax. There are other revenue measures involved as well.

Legislator: So you are saying it's on me?


Legislator: If we raise the GPT, oil companies will leave the state. You: Oil companies are beholden to their shareholders. As long as there is oil here, they will drill it, and we have the SCOOP and STACK plays that are booming right now.

Legislator:   What are you doing in my office anyway?  If you care about your students, shouldn’t you be in class or working on lesson plans?  You shouldn’t be advocating for an increase in your own pay.

You:  I am here because I care about students, and want them to have the best education and teachers possible, and you are one of the people who has control over that.   I’m for a teacher raise because it helps the state retain good teachers, not out of self-interest other than the fact that I want to be able to do the job that I love in the place that I love, and it is currently difficult to do.

Legislator:  You are just listening to that liberal teachers’ union.  They are just dang liberal liberals.

You:  The Oklahoma Education Association includes teachers from all political perspectives, and focuses on education policy, on which there is more and more common ground.   They work with legislators from both sides of the aisle, but certainly wouldn’t support a legislator who bashes teachers and does not support funding.  That would be dumb.  Besides, many groups other than OEA are supporting teacher raises, including a group that represents oil and gas producers.  They all represent both Republicans and Democrats.

Legislator:  I saw in the paper that a teacher did a really awful thing.  Should we be giving teachers raises when they are doing stuff like that?

You:  So every person in a given occupation should be judged by the actions of a few?   Let’s talk about Ralph Shor…

Legislator: It is clear that I should vote to return to the rates of GPT and the top bracket of state income tax that existed before we cut them. That would help us retain teachers and not put the burden entirely on families or other groups that can less afford taxes. I'm going to go do that right now.

You wake up elated, and then disappointed that it was only a dream.  You should have known because it went a little too well.  You know it won’t go that well in real life, but you know what to say, and you have every right to say it."

Brendan Jarvis is in his 14th year of teaching at Union Public Schools in Tulsa and his 20th year over all.  He began his first term on the Oklahoma Education Association Board of Directors representing Tulsa Metro Zone D this past summer.  His children attend Union Schools and are members of the Renegade Regiment marching band.  He is a proud Union teacher and a proud union teacher.