I spent an amazing weekend in Grinnell, IA, participating in their Commencement at the invitation of one of my former students, but this post is not about that day. I WILL write about it soon.

My four plane trips, connections to Dallas and Des Moines, then back, left me harried and frustrated and downright cranky. I see sad parallels to what’s happening in #oklaed, and I need to get it off my chest.

The airlines have been charging for checked luggage for years now, and it drives up the cost of our travel. I usually just pay the extra so I don’t have to pack exceptionally light, and I don’t have to spend the day maneuvering with my carryon and ‘one personal item’ on and off airplanes, and in the terminal. It’s a choice I’m able to make, and an extra expense I pay grudgingly.

Many travelers, for whatever reason, do not make that choice. Over the weekend I saw some creative labeling of that ‘one personal item,’ and too many duffels and rolling cases to last a lifetime.

They’re an inconvience for us all. It starts in the terminal. One woman in front of me ordered her lunch, rolled her case while shouldering her backpack through the crowd. But, whoops! She forgot napkins! While continuing her phone conversation, she wheeled back through those of us in line…twice…to get her napkin and return to her seat. It was our job to avoid getting our toes mashed. 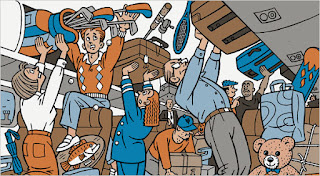 But on the plane it’s even worse! I see games being played by passengers who want to bring more and more into the cabin…roller cases packed to capacity, and the expansion gusset opened to the point the cases won’t even fit in the overhead compartments (wheels in our wheels out? I forget!!) Passengers huff and puff, push and shove trying to convince the line behind them that the case will fit!! Then, I saw a duffle today…longer than the compartment. I lost track of that one, but didn’t notice anyone having to do the ‘walk of shame’ up the aisle with the offending piece of luggage and submit to gate checking! (Gasp! The horror!) So, it must have been averted.

One personal item – to be placed under the seat in front…women jam one large purse inside a slightly larger tote and call it good. Shopping bags filled to the brim. Backpacks that could put out the eye of anyone behind them (more on that later). Smaller duffels…anything to get as much stuff onto the plane for free, thus avoiding that checked-bag fee I paid.

Another game gets played at the gate…by people who hope the agent will announce that the flight is filled to capacity and could 15-20 passengers volunteer to check their carry-on here at the gate, for free. FOR FREE. They avoid lugging everything, and they avoid the fee I paid. If the flight isn’t full, they just lug it all onto the plane. Obviously worth the risk for some.


On my last leg today, I saw a little old lady (Yes, I know. I resemble that remark) nearly get taken out…twice…as she stood in the aisle, just trying to hold her place to get off the plane. Someone wrestled their ‘carryon’ bag out of the overhead compartment and nearly lost hold of the heavy, unwieldy object…it almost hit her. She was spry and avoided it. Moments later, another passenger, shouldering her massive backpack wheeled around and actually did hit my seat mate with the pack. Her cute straw hat slipped down over her eyebrows.

Watching this, I was first ready to be angry at my fellow passengers for trying to cram the cabin with all their worldly belongings…but then I remembered WHY they are doing it. The airline policy and the airline commitment to the bottom line, not passenger comfort. I was frustrated with the wrong people.

This brings me to my #oklaed connection…and yes, there is one.

Our legislature has systematically starved Oklahoma public schools since 2008. Cuts while the state was flush with oil money. They instituted reckless tax cuts, they gifted corporations with tax credits, and they bankrupted our state. When the bottom fell out of oil prices, they cried, “Woe is us!” and blamed the oil market, conveniently forgetting all their deliberate, foolish, decisions.

Here is a comprehensive look at the responses our school districts have been forced to make, in response to a do-less-than-nothing approach to funding our schools. Thanks to Oklahoma Education Journal.

Schools have been cut…and cut…and cut. Norman Public schools let all library aides go, and sent all math and reading instructional coaches back to the classroom. At least one central office position was eliminated. Noble Public Schools closed this year early, and then chose to go to four-day week next year. In the airport today, I learned  through the grapevine that Oklahoma Public Schools will essentially fire all custodial staff, and ‘allow’ them to reapply for their jobs, at a lower salary. Other Metro districts are making equally distasteful decisions. Here and here. Millwood teachers chose a voluntary furlough day, to save colleagues’ jobs.

That teacher shortage we had at the beginning of the year has ‘solved’ itself, as districts have been forced to lay off teachers, including one who’s running for the House District 93, Mickey Dollens.

I despair at each of these decisions. Cutting the school week will directly will affect student learning, and it will also affect all hourly employees in a district. The bus drivers, cafeteria workers, custodians, classroom aides, clerical workers. They will take a 20% cut in their pay. Families will have to scramble for one day of day care for students, adding expense to their budgets.  Students on free-and-reduced lunches, some of whom eat twice a day in the school cafeteria, will go hungry an extra day every week. Every. Week. Firing, and they rehiring workers for less money will be detrimental to these, our most marginalized workers.

I am furious as I see what is happening to our schools, as leaders have to make agonizing decisions just to stay alive.  BUT I know any anger at these leaders is misplaced. It distracts us from the real issue…the real reason we are suffering. District leaders are not making these decisions because they want to. They’re making these decisions because our legislature and policy makers have strangled schools – and other public services – to the brink of death. Policy makers created this problem and they are fully responsible for every custodian in OKCPS who loses his or her job. They are responsible for hourly workers in schools losing 20% of their salaries, for the teachers who have been laid off, for the parents who must find one day of care for their children, for the overcrowding of our schools. They are responsible for students

Supposedly, there is a state budget today. Forgive me if I don’t cheer. The boast that there will be no ‘more’ cuts to common education ignores the facts…less funding than eight years ago, and more students. That’s a cut, even for this number-challenged English teacher.  Plus, there are cuts in so many of the social services our students’ families rely on. The services that help our students stay healthy, housed, fed. Those cuts will affect our students.

Place the blame on the correct culprit…my seat mate would not have been smacked in the head with an over-stuffed backpack if we could still check luggage for free, or for a nominal fee.

We can’t do much to pressure airlines into ending a profitable practice…we could all fly on Southwest, who doesn’t charge us for one checked bag. But we’d have to sit in those cramped seats.

But we can do something about who represents us at the Capitol. We can search legislators’ voting records – on education bills and on bills that would support and sustain families. We can ask hard questions of candidates. We can show them #oklaed is our priority. Healthy students in our classrooms is a priority.

Our students recently led the way, marching to the Capitol, holding the policy makers who caused the budget failures accountable for the devastation. We must follow their example. Start by planning to attend Let's Fix This at the Capitol, Thursday at 10am. Begin your summer break by reminding legislators for whom they work, to whom they are accountable.

Then we can vote the bums out.

Until we do, I offer George Carlin.