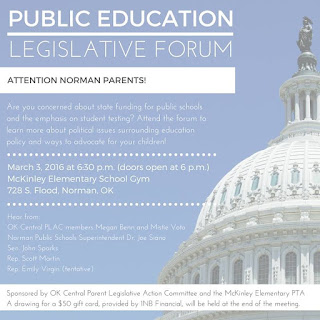 There was a parent legislative forum last night at McKinley Elementary in Norman. When I saw the notice on FB, I put it on my calendar right away. I got there early, and was so disappointed that the gym was not full…then I figured out this was designed specifically for McKinley parents, not loudmouth Grannies who crashed the party and ate cookies. There was a healthy crowd, asking pointed  questions.

Dr. Joe Siano talked about the budget…and reminded us that just that day we were given notice that school budgets would be cut AGAIN…Representatives Scott Martin and Emily Virgin were there, as was Senator John Sparks. Rounding out the panel were two founding members of the Oklahoma Central Parent Legislative Committee, Megan Benn and Mistie Voto. Dr. Siano spoke first and then each member of the panel spoke.

The panel talked about vouchers, the Oklahoma Standards, still to be approved by the Legislature, funding, the revenue failure, legislation to scale back on high stakes testing, other agencies whose work complements education. And funding. And funding.

I was taking notes as quickly as I could, and will try to attribute quotes if I’m sure of the speaker. Otherwise, I’m sharing the high points of a long evening. Every policy maker was still there, after 9pm, talking to parents and grandparents…giving their time to our community.


Dr. Siano reminded us that education is, indeed suffering with this second revenue failure…but so are other state agencies, also working with vulnerable citizens. We are all in this together, for sure.
He spoke of the drop in real dollars in the state’s per pupil expenditures—
2008 -- $3278
TODAY -- $3059
NEXT WEEK -- $3000-$2980
“We are training teachers for other states.”
He suggests tapping into the Rainy Day Fund to protect agencies

Senator Sparks thanked parents for coming and admitted that ‘apathy is the biggest challenge for us at the Capitol,” urging us to get involved.
He pointed out that if we as a state are 1000 teachers short, “the free market is speaking.”
He left Representative Martin to try to find ‘Rainbows and Sunshine.’
Martin told everyone that PLACs have made a ‘huge difference,’ and spoke of the change from even four years ago…he said parents have voiced their concerns over and over, and “efforts are being noticed.” He urged us to “keep up the drum beat.”

Representative Virgin agreed with Dr. Siano that the Rainy Day fund might be an option…but she reminded us of other vital services that have been cut…services that work in partnership with education, namely health care and criminal justice. These cannot be neglected in our focus on education, as they are all connected

We were told that some legislators discount the opinions of educators, so parents must speak up and be assertive.

Sparks told us, ominously, that not everyone at the Capitol sees the current crisis as a problem, that some are not concerned about the situation, as they do not believe in investing in education.
He told us ‘Investment is not a liability.”
They spoke of the ESA bills. Someone (?) said adding the private school students into the funding base is an insult to public schools and educators.
“Kids are worth as much as bridges and roads.”

Martin told us he’d begun his day at the Book Fair and Donuts for Dads at his child’s public school.
He knows “we’re drowning here.” And, “Public schools are still where it’s at.

The policy makers were asked how to reach out as parents and citizens. They all pointed out that building a relationship with legislators is important. They urged us to reach out before the Session and during the session.
Virgin suggested working for candidates who support education.

Martin spoke of conversations he’s had with fellow lawmakers who are candid about their lack of support for educators. He quoted them: “They (teachers) will never be for us…why should we be for them?” He said he asks them to “Be for my kid…My kid is a public school student. Be for my kid.” That was the line that resonated with me….Be for public school students!

Megan Benn spoke of our success in overturning the Governor’s veto on the RSA bill…and told us we did that with stories..”Stories mean more than data.” She encouraged parents to share their stories with lawmakers, to keep them on focus.

A preservice teacher who told us she and her classmates had cut class to come, looked hard at the lawmakers. “I’m not employed here yet…What’s keeping me in Oklahoma?” Took our breath away. Indeed…what’s keeping our young teachers in OK?

The panel spoke of the negative discourse about educators and said that must end.  “We as parents can do a better job of respecting teachers, and that will spill over to the legislature.”

We were told that state-wide assessment costs $10 million, but for NPS, Dr. Siano said the cost is human capital and time…very true.

One mother told the panel clearly that with continued cuts, “Kids aren’t getting what they need.”

Besides Martin’s line, “Be for my kid,” my other favorite line came from Senator Sparks talking about ESAs: “ESAs will re-segregate schools on racial, religious, and socioeconomic lines.”

My take-away? Parents are interested, informed, and assertive. They may not know how to begin advocating, but they’ve got the tools. Our lawmakers are accessible and willing to listen. They are invested in the public schools, and they know we care.

They encouraged us to build relationships, visit, write, call. And I hope every parent there takes them up on that offer. They won’t always agree with us, or vote the way we want. But if we’ve got that relationship, we can keep the conversation going. I believe these lawmakers want these conversations. And if they don't, we need to reach out anyway.

Parents are the difference-maker. Their stories will make a difference.

Stay tuned in. PLAC promises more forums – and I’ll crash them, too. I think you should as well.
Posted by Fourth Generation Teacher at 7:33 PM