Outside my comfort zone!! That’s a good thing, right? Learning occurs there. If you discover I have made a mistake, or misrepresented something, or misinterpreted, please know I welcome feedback to correct. Another way we learn.

So, when I looked at HB2003, authored by Jason Nelson, who never met a voucher he didn’t love, I took notice. Coauthored by Newell, Rogers, Strohm, Bennett, Echols, Jordan, Kern (my favorite crazy), Hall, Brumbaugh, Moore, Fisher, Johnson, and McCollough of the house and Jolley in the Senate, even this Legislative novice hears the alarm bells. They’re already lining up the troops for this bill.

So, what is is? “Oklahoma Education Savings Account.” Twenty-one pages of dense language which boils down to a scheme to allow any parent to take a portion of the per-pupil funding and take it to a private school or tutoring concern, or private online school.

Alarm bells that spelled out A-L-E-C. American Legislative Exchange Council, the shadowy group set up by the Koch Brothers to court legislators with big donations and fancy trips. 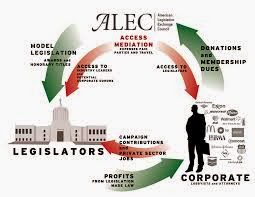 ALEC promises to write model legislation FOR said Legislators, so they can just fill in the blanks. The Lindsay Nicole Henry Act was ALEC legislation, and we’ve seen the Parent Trigger bill fail once here. Our Legislators are proud ALEC members.

So, let’s look at the list of Legislators again and compare with ALEC membership. SourceWatch supplies a list, and their committee membership in ALEC. I cannot find any connections between the major author, Mr. Nelson and ALEC, except for the undeniable link between HB2003 and the ALEC model legislation.

This is not the first time Nelson has proposed this legislation and used the ALEC model.
Rob Miller wrote about his attempt in the last session here.  So did Rick Cobb, as Okeducationtruths, here.
I attended an  OICA meeting where Rep. Nelson participated on a panel, telling professional child advocates that vouchers was one of his issues for the new Session. He is true to his word. He couldn’t get it passed last time, but he and his buddies are back for more.

Rob provided a link to the 1014 legislation…it is the same number of pages (21) as this year’s bill…and the last pages are identical. Please forgive me for not reading all 21 and comparing, word-for-word.

I DID read the current bill, and compared it to the ALEC model legislation.

·         All definitions came straight from the ALEC model.
·         ALEC actually has more provisions for private school accountability than HB2003. All the accountability seems to rest on the public schools and parents for OK.
·         ALEC wants public schools to provide transportation to private schools; OK excludes transportation
·         Both provide protection for private schools taking public money from government overreach.
·         2003 creates more bureaucracy for OSDE, while allowing them to keep 5% of the funds for administrative costs. It also creates a Treasurer’s Education Savings Account Administrative Fund, and they can withhold 1%. ALEC suggests states use private financial management funds to administer. It appears that if there are funds left over, both OSDE and the Treasurer ‘shall be exempt from the provisions of law Req. No. 6281 Page 13 relating to lapsing of appropriations.” HUH?
·         The percentage of funding a parent can take from public schools to a private school are different for 2003 and ALEC, and I don’t understand it at all: OK suggests households under free and reduced levels be given 90% of State Aid. ALEC suggests 100%. For families earning less than 1-1/2 that number, 2003 suggests 60% -- ALEC suggests 75%. For families earning over 1-1/2 but less than 2 times, would be given 90% under 2003, and ALEC suggests 25%...That makes no sense to me. It appears that families most able to provide are given more. THEN in the next paragraph, 2003 says any eligible student will receive 90% of State Aid. I told you I was out of my comfort zone.


If you only read the endnotes on the ALEC link, it's well worth it...it's folksy advice for Legislators who are filing this 'fill in the blank' legislation under their own names.

Where does this leave #oklaed? Right back where we were last year, fighting the exact same fight, with the same stakes: public education.

Last year Rep. Nelson called a news conference to announce ‘his’ bill during School Choice Week. We should expect the same, this time with a whole lot more ‘authors’ behind him…strength in numbers? They have the Koch Brothers behind them…with all their billions

This bill still stinks. It’s still wrong for public education. We must fight it all over again.