A Review: THE SMARTEST KIDS IN THE WORLD by Amanda Ripley

Well, another non-educator has all the answers...but she writes very well and she tells a good story. 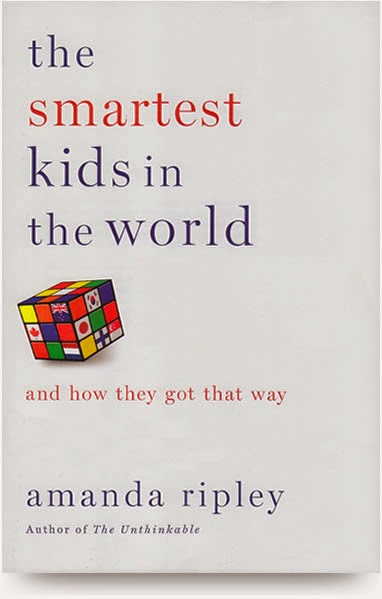 I was asked to read this book by a local lawmaker who wants to discuss the points. So I took notes...7 pages of 8-point notes.

Let's start with the title...'smartest kids in the world.' How is this measured? Life accomplishments? Nobel Prizes? Inventions? Nope. Test scores. The PISA test, in particular. Kids are measured as smart or not smart based on the scores of one test. AND how many US kids take this test (along with all the mandated tests, the NAEP, and whatever our policy makers decide to throw at them)? Just over 5000 kids from random schools. There are 49.8 million kids in public schools in the US, and PISA tests a random 5000. Already I'm not sure her premise stands up to scrutiny.

But, let's pretend a test that only 5000 of 49.8 million kids take really does measure smarts...and that is up for debate. Ripley has accepted PISA as the be-all-and-end-all, but others, most of whom are educators, are not so certain.

Now, we have a test that was administered to a pitifully small sample, and a test that may not be the shining start it portrays itself to be.

Onward. Ripley takes three US students who spend a year abroad -- one to Finland, one to S. Korea, and one to Poland -- attending schools in three countries who supposedly have kids who are much smarter than our kids. She introduces us to them in their US home schools, and follows their adjustments in their host countries.

Ripley seems to thoroughly enjoy ripping OK schools...where I spent 34 of my 39 years as a teacher. She appears to have interviewed teachers and administrators in good faith, but her chosen quotes are not-so-subtle swipes at our (I am an OK educator)worthlessness, our excuse-making, our inability to prepare kids for the real world. Of COURSE I got my back up in those sections...and she spends much more time ripping Oklahoma schools than the Pennsylvania and Minnesota schools the other US kids attended.

Then, she examines the three countries' schools and tries to suss out what makes their kids so much smarter than our kids...

I thought Finland's system only let applicants try once, but Ripley tells a story about one teacher who applied three times, and his life experience as a substitute teacher finally tipped things in his favor. I like this idea...

But in the US, where do we start? Schools of Ed are seeing a decline in the number of applicants, and that is NO surprise. Most of us know, going in, we won't become millionaires, but there was a time when US teachers had the respect of the community and policy makers, and enjoyed a measure of autonomy. Now, teachers are poor, reviled, overworked, under-respected, and are micromanaged by reformers. How can colleges raise standards for admission now? I am mystified about how to end the cycle of attacks so that standards can be raised. I'm not against making teaching more prestigious by raising the standards...but I don't see how we can start here...

Finnish schools receive funding according to need -- schools that have challenging populations have more money...quite the opposite of what happens in US schools. Special education is also handled very different...special ed is seen as an intense intervention of limited time...something to give a kiddo a boost through a tough, temporary time of struggle.

All Finnish kids take a grueling series of matriculation tests. Ripley tries to equate this to OK's End of Instruction tests, but there is no comparison. I'm not against a true matriculation test, where everyone, teachers, students, parents, policy makers, agree on exactly what will be tested and how it will be tested. The Finnish tests are NOT low-level multiple choice tests...She also equates this experience to the ACT and SAT...no. They are exams that supposedly measure a student's ability to do college work...I say 'supposedly' because, come to find out, they're not so good at predicting college success.

One teacher's advice is priceless: "You should start to select your teachers more carefully and motivate them more. One motivation is money. Respect is another. Punishing is never a good way to deal with schools." Indeed...I don't see reformers jumping on that bandwagon with both feet.

On to Korea...an abusive system where kids may attend school of one kind or another for up to 18 hours a day...where everything is focused on the test, and getting a good score. The entire country is hyper-focused on tests and scores. Kids sleep through their day-time classes, and attend private tutoring schools at night. PRIVATE...parent-funded. Inequitable. 'In 2011...parents spent almost $18 billion on cram schools...' And the wealthy parents got the 'successful' schools and teachers...Ripley calls the system a hamster wheel, but she says she prefers it to the US moon-bounce attitudes. I do not. This system beats up kids, it bankrupts parents, and it causes a system of inequity for its students.

Poland seems to be in this book because they adopted national standards, and it's apparent Ripley loves Common Core...on closer examination, Poland may not be the miracle she touts it to be.

She says these countries are committed to teaching students high level thinking...and implies we don't. She throws around the word 'rigor' without telling us what it means...does it mean 18 hours a day of school? Two six-hour writing tests to graduate from Finnish high school? Is it constant drilling, humiliating kids when they don't know the answer? Is it publicly announcing the scores to the latest test to everyone in the room? Those are all practices of the schools where the world's smartest kids attend.

Do I defend US schools to the death? No. Ripley makes some interesting observations I've wondered about myself.

US schools are teeming with technology...white boards, interactive clickers, iPads, Chrome books...we've go it all. But... The three countries here do not have that technology...and their kids perform well on international tests. I think we need to ask ourselves with complete honesty if we're getting return for the millions we spend on technology...when it could be spent in other ways.

Sports came under fire also. The US is the only major country where sports are the focus of so much time and energy and money. Again, we must ask ourselves...does this investment reflect our values?

I REALLY liked her advice to parents who are looking for a new school...We should all be asking those suggestions: Watch the kids. Talk to the kids. Listen to the parents. Ignore shiny objects. Ask the principal hard questions.

But she feels duty-bound to return to OK, talk to the CEO of BAMA Pies, and rip us again...our high school graduates are so lousy they can't get jobs at BAMA, and the company must leave OK for an international plant; didn't have anything to do with lowering their own production prices, I'm sure.

And in her spirited defense of CCSS, she reviews OK's recent repeal of the standards she loves and defends and accepts without question...and she quotes Sally Kern to show how backwards we all are. To quote the FaceBook group title: "Sally Kern does not represent me!"

She makes good points about parents -- parents from countries with 'smart' kids don't coddle, but DO coach...the read to them daily, they ask about school and discuss current events. They make it clear that kids' job is to work hard in school, and parents' job is to make that happen. That attitude is not universally practiced in the US.

I found Ripley's tone snarky when speaking of US schools or educator, or parents. She obviously looks down her nose at us all, and sees us 'wanting'.

At one point, she writes, “There is much to be said for American teachers, who, in many schools worked hard to entertain and engage their students…” Excuse me?? ENTERTAIN? Entertain?? How dare she who has never taught a day in her life talk about my efforts to ‘entertain’ my students. I am a teacher. I teach. I am not an entertainer.

Of all her snarky comments, the one that sent me over the edge was her dismissal of Diane Ravitch as 'one of the most popular education commentators in the US.' Is she aware Ravitch is a PhD, a professor of education history, and was a member of the US Department of Education? Her credentials are legendary...she is far more important than 'a popular commentator.' I don't know if this is Ripley not doing her homework, or if it's her trying to negate Ravitch's arguments about the PISA and international testing in general. Either way it is insulting to an educator who's devoted her life to our kids.

So, questions for reformers:

An interesting book that obviously made me think a lot. But in the end another attack on US schools and educators. Just better written than most.