A lot of fake outrage and high-sounding language has been flying around here in OK after the USDOE chose NOT to extend our NCLB waiver. Mary Fallin blames Obama…of course she does. She wants to remind the reddest state in the Union that she is the Republican. Um, Mary…believe us. We know.

Jason Nelson, a co-author of HB3399 that fast-tracked our repeal of CCSS without adequate plans in place to make the transition a smooth one, seems unimpressed by the loss of funds to the state.

Barresi continues to push for speed-writing the Standards. It appears as if she wants to control the direction, even in her position as lame duck.

OSSBA has shared concern, Joe Dorman has made a statement, as has Joy Hofmeister. I can find no statement from John Cox on his Facebook page or his campaign page.

I was reminded of the song from My Fair Lady, "Show Me." It begins with, "Words, words, words. I'm so sick of words." I'm sick of the words that hide intent and values. But I know how to unpack these statements and get to the real message...intended or unintended.

One of my favorite tools for looking at written language, and the message that may hide from us if we’re not careful is wordle… www.wordle.net allows you to paste in text and it analyzes the frequency of words used, and creates a word cloud. The bigger the word, the more times it was used. I have had students ‘wordle’ their papers and analyze the word cloud, asking themselves if their intended message became clear.  I often wordle political speeches and see the hidden agenda. An interesting follow-up strategy is to take those larger, more frequently-used words, and use them to create a theme or summary statement. Those are the words that reflect the speaker’s true values.

So, for your reading and analyzing pleasure, wordles of yesterday’s responses to our waiver loss. 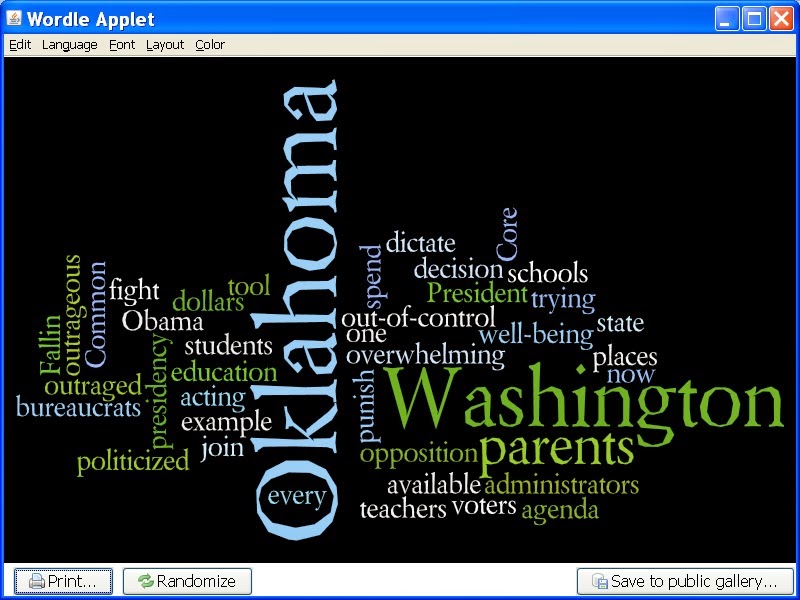 What do we see? “Oklahoma” and “Washington”. Two places she has lived and worked. “Parents” and “Obama” are clear…and look there on the lower left: “politicized”. Oh, yes, Governor Fallin. This situation is politicized. Starting with the lack of a plan to certify our PASS standards as ‘college and career ready,’ whatever that phrase really means. Including your coy game of ‘Will she? Won’t she?’ sign HB3399. Up to your defiant nose-thumbing at the very rules you once chose to abide by. Rules that hadn’t changed.  In fact, the only thing that did change is YOUR position on CCSS…as Chair of the National Governors’ Association, you seemed all for CCSS…then you weren’t. Now, you blame everyone but yourself for the mess you created. Love that “outraged” and “outrageous” both appear here. 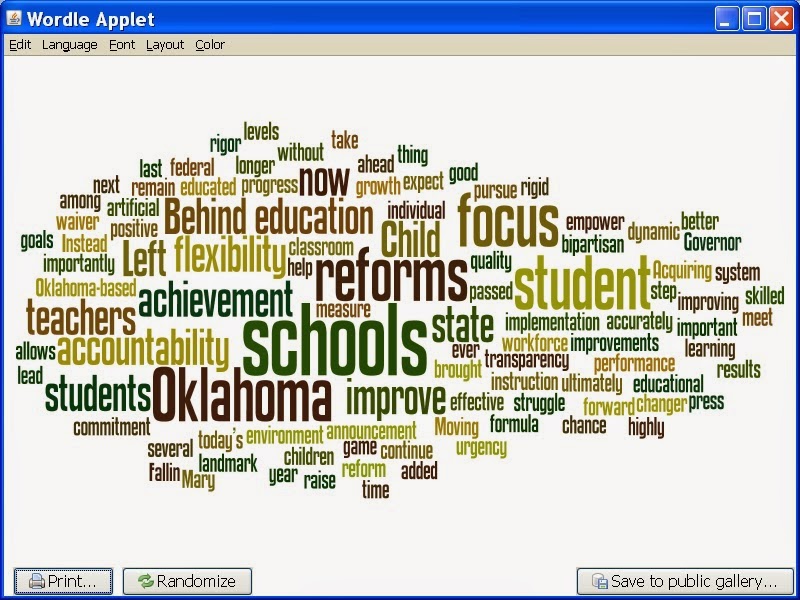 Looking at this one is interesting…no wild political words jump out…Is she being reasonable in her last months? “Schools” and “Oklahoma” and “student” and “focus” and “reforms.” Nothing new…but I love the fact that “transparency” and “rigor” are both smaller. I see the word, “now”, which has been the Superintendent’s mantra since losing the primary election.

OSSBA weighed in with a statement: 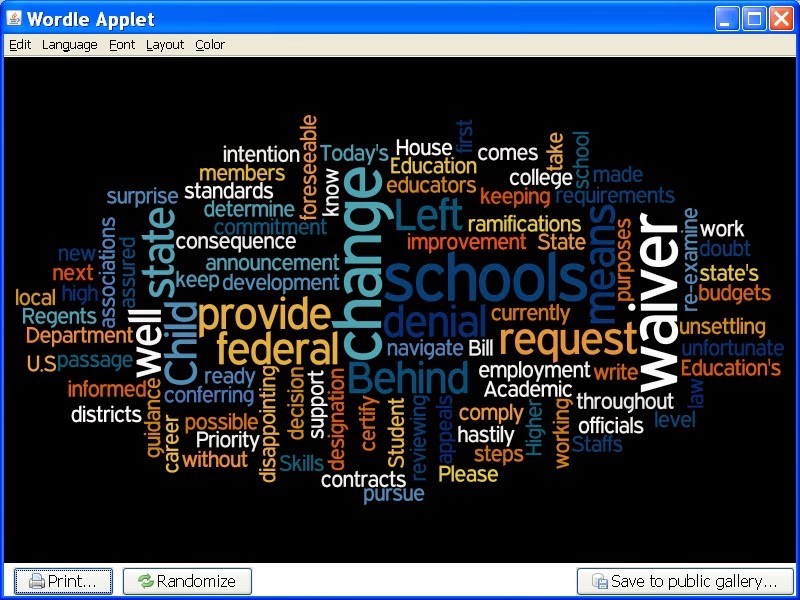 “Change” and “waiver” and “schools.” “Child” and “federal” and “provide.” This is the first wordle to highlight the word “child”, and I’m grateful it’s the school superintendents who speak about our children, who are being “Left” “Behind.” I think I like what this one would communicate. 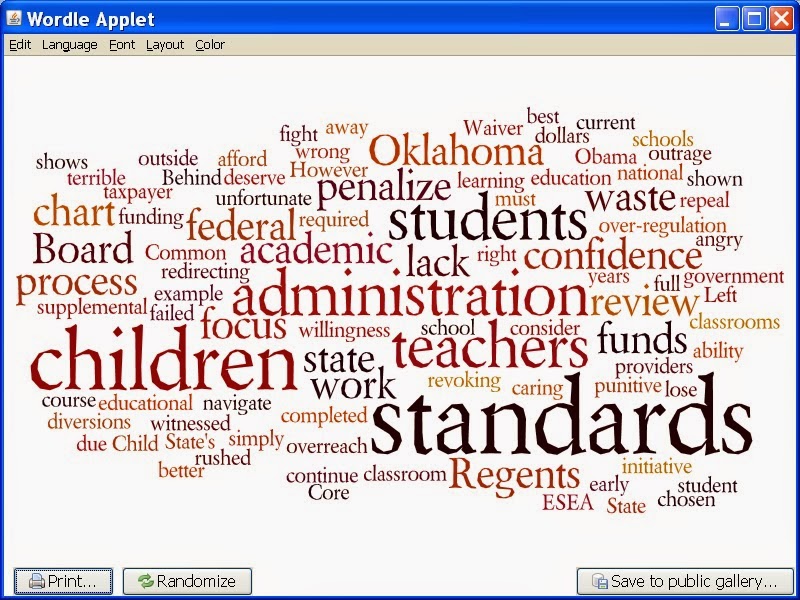 “Standards” and “children” and “administration” and ‘teachers” and “students.” She manages to hit most of the stakeholders in this statement…”however” she blames it on “federal” “overreach”. “Confidence” and “waste” are there as well. What kind of theme statement could we compose here? 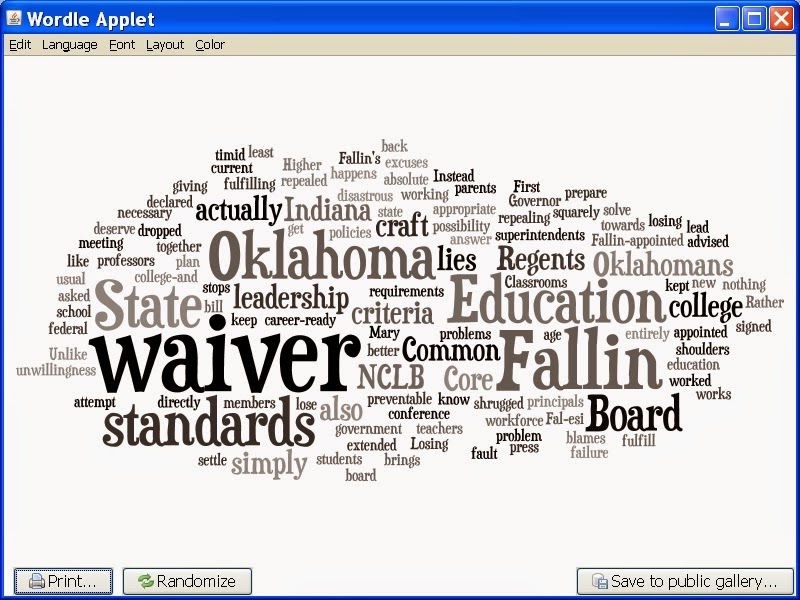 “Waiver” and “Fallin” jump out at us…so does “state” and “Oklahoma” and “education” and “standards.” I like the little nod to my home state, “Indiana”, which did get the waiver extension yesterday. Dorman rightly reminds us we have our current governor to thank for the mess we’re in. Right there, in the middle of the image is “preventable.” For sure. Preventable.

One last wordle…even though I don’t have the whole text of Jason Nelson’s statement at his press conference, I do have excerpts. 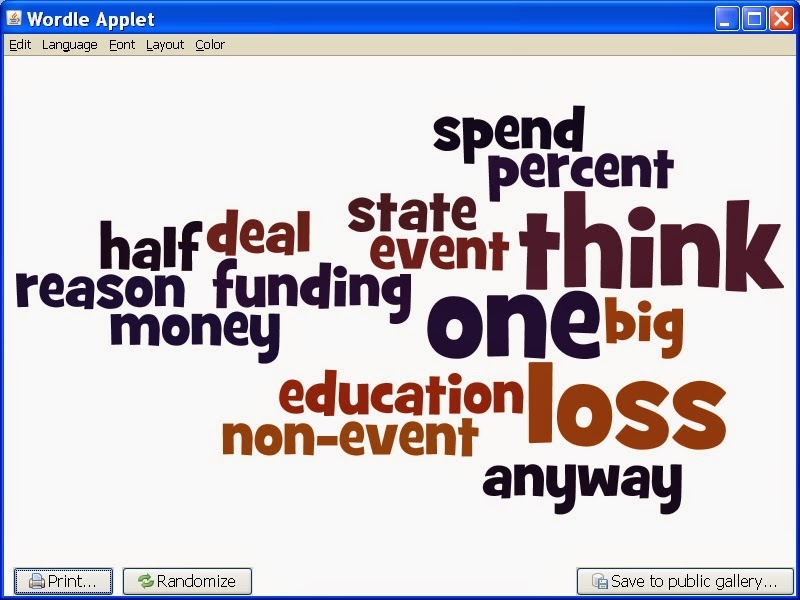 Look at the inadvertent arrangement of “one” “big” “loss’! Oh, I agree. I think it’s also telling that he focused on “funding” and “money” and “spend”. And he pronounces it a “non-event.” Tell that to the schools that are now at risk of being labeled failing, and are now facing the horrible consequences that are the centerpiece of NCLB. A friend, a teacher at one of those schools, asked frantically last night, “What will happen to our school?” Silence. Crickets. Nothing.

The funding side of the waiver is huge, NOT the non-event Mr. Nelson asserts. But the other consequences to our schools, nearly all of which will be deemed to be failing schools, those will be incalculable.
Posted by Fourth Generation Teacher at 7:25 PM