What a day for #oklaed! I trekked up to the Capitol for the third time in two weeks to be there for the House override vote of Governor Fallin’s disappointing veto of HB2625, which would allow a team of parents and educators make a recommendation about children’s placements if they scored ‘unsatisfactory’ on the infamous third grade reading/English language arts test. Last night I waited, in vain, along with many online friends, for the Governor to send the House her veto message. I listened to the proceedings online, and the Representative presiding kept asking if they had received the message. The Tulsa World newspaper had it at 5:31, but the Governor chose NOT to send it to the House until 11:59, assuring no override vote last night. In the meantime, the arm-twisting began. She wanted her veto to stand.

Before I left for the Capitol, I wrote one more email to the Representatives.


I want to share facts, not rhetoric, facts, about the bill from my perspective as a reading specialist with 20+ years of experience with remedial reading at the elementary and high school levels.
2625 is a needed course-correction for RSA. The test on which it all stands is deeply flawed:
1. It is not a test of reading comprehension alone...it alsotests poetic elements, figurative language, vocabulary, and research tools(like almanacs and phone books).
2. It cannot give reading grade levels. It is a criterion-referenced test, not a norm-referenced test. There is no way to say, as I've heard many politicians say, that a child who scores Unsat on the test reads at the first grade level. Might be he doesn't know what an almanac and phone book are for.
3. The cut score for 'Proficient' is a moving target, often changed by politicians, even after the test is given.
This flawed test is the foundation of RSA, and we must find ways to bring more flexibility into the process of retaining or promoting our children.
That is all 2625 does: it allows flexibility, on a case-by-case basis, to look at all the data about a child, including this flawed assessment, and make the best decision for each child.
Why in the world would the same Legislators and Governor who supported vouchers, school choice, and Parents' Bill of Rights, now balk at providing deeply committed public school parents the right to participate in decisions about their own children?
I listened to the debate and vote in the House about Rep. Nelson's voucher expansion, and he said, quite eloquently, "Let's trust parents."
So, I challenge you today, vote to override the Governor's veto...
"Let's trust parents."

So, up to the Capitol I went…again. We lobbied Representatives, requesting their presence, and told our stories. My own Representative, I learned, had a fundamental misunderstanding of the nature of the team, and the outcomes that were possible. He told me I was mistaken, even when I explained again. *Sigh*
We waited, we talked, we told our stories. Parents brought certificates of achievements, blue ribbons for academic excellence, they talked about their children. They had pictures of their third graders on their phones, they cornered the lawmakers with their passion. Teachers told eloquent tales of exactly what the current RSA looked like in their classrooms. How children would be affected without the override. Legislators were, for the most part, polite…some fibbed and told parents they were ‘on the fence’ about the vote, only to vote exactly like we’d predicted. One Representative even signed up to debate against the override…not so much fence-riding as he let on, huh? We kept unofficial tallies of who was a ‘yes’ vote and who was a ‘no’ vote. One extremely rude person suggested a parent just homeschool…after asking if she had a job. Are you kidding??

A huge unforseen thrill of the day was meeting friends...online friends who are tiny avatars in my life. Now I've met Jason James and David Blatt. I met Keith Ballard. I even reconnected with an old friend who was lobbying for D.A.'s. It was a busy day, and there was time to visit as well.

All morning we waited. We waited and vote-counted. Did we have enough? Friends (and we have some great friends) in the House warned us it would be close...no guarantees.We waited through the 1-1/2 hour lunch break. We waited as they reconvened. Then, we heard that the vote would come to the floor. I rushed up to the Gallery again, absolutely uncertain of the outcome. We needed 76 votes to override, with the emergency, which allows the bill to become law immediately. The emergency was vital for this year’s 3rd graders who had not passed the reading/ELA test.

The preliminaries to the vote are a mystery to me, but I waited…they were going to debate, and then they didn’t. They voted. We watched the board… on May 12th, the bill had passed the house overwhelmingly – 83 to 6. The support was bipartisan and strong. But we knew the Governor was pressuring, promising endorsements, and we heard, Thunder tickets for a ‘no’ vote.

The electronic board ticked away…65…70…71. It seemed to get stuck on 73…I held my breath…and suddenly it was 79. More than enough to override with the emergency. We cheered. They cheered on the floor. The gavel banged and banged again. We were reprimanded and told to stay quiet. We celebrated silently. But we celebrated. 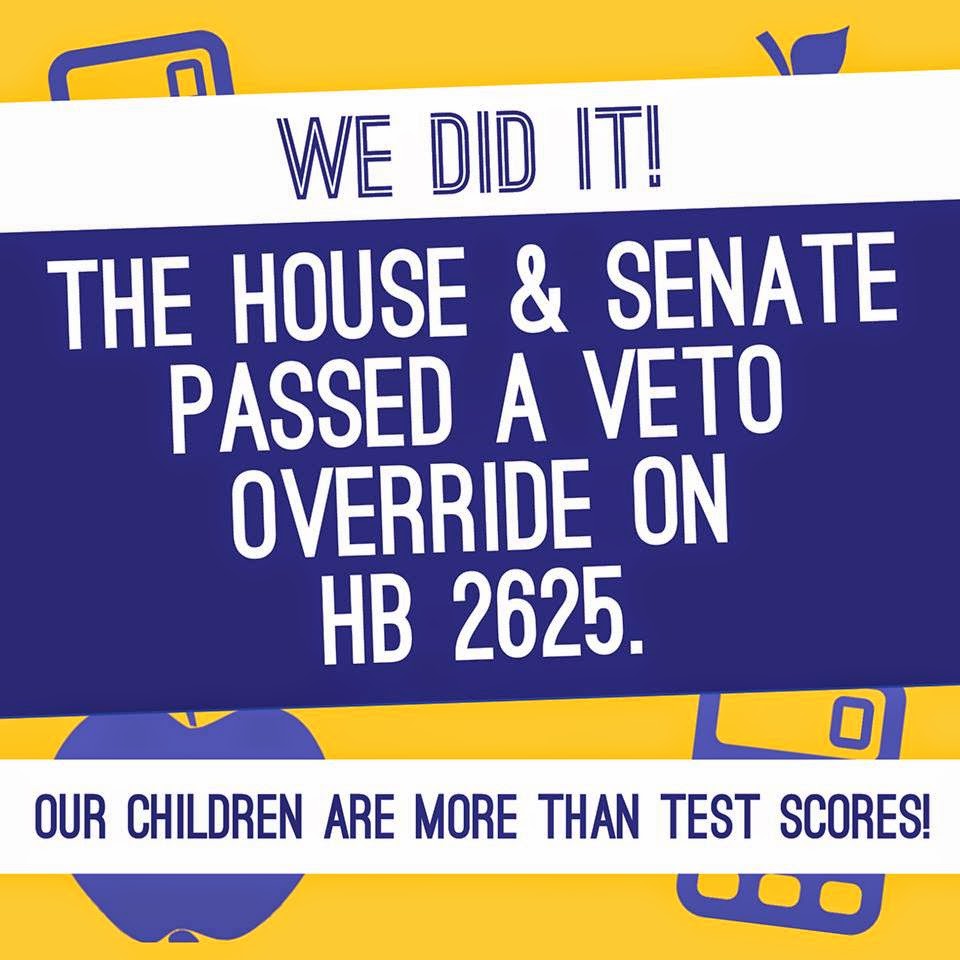 I headed home, and by the time I got here, the Senate had already overridden, with only two ‘no’ votes. They wasted no time…they did the right thing.

Then the responses began to appear…petty, small-minded responses. Uninformed responses. Ignorant responses by politicians who are obviously jockeying for positions in their own minds, on the national scene. They were thwarted, and they were angry.

Governor Fallin  said she fears “we are setting these children up for failure. We are asking them to succeed when we haven’t given them the skills they need to go on.” She has not provided the resources for schools to do that, but now that is the issue. I’ll see if she offers more support for RSA, but I’m not holding my breath.  She spoke of the ‘widespread reading deficiencies we see in our schools.” I dare her to come to any school in this state and find “WIDESPREAD DEFICIENCIES. Hyperbole is ugly sometimes. She obviously believes this reading/ELA test that cannot give reading levels accurately measures reading deficiencies. It doesn’t.

Superintendent Baressi was more pointed and bizarre. “Oklahoma children must be able to read…Today’s action is a pathetic and outrageous step back.” Remember, she’s speaking about the elected Legislators who had overwhelmingly passed the measure, and had deliberately overridden the veto. She just called them pathetic. Now they know what it’s like to be in her target. Teachers have been there since she took office.
She brought up the specter of ‘a failed system of social promotion,’ obviously not understanding the work of the team which will now be in place. See, Superintendent, the default decision is to retain. Everyone on the team, the parent, the 3rd grade teacher, a 4th grade teacher, the reading specialist if the school has one, the principal, all have to agree to promote…do you really think a group of professionals will socially promote, and then send that decision to the district superintendent for final approval? Don’t bother answering…I guess you really think that little of the professionals and parents…you really think they’d promote a child even though it’s not the right thing to do academically. THAT is pathetic.

Then she went against my previous recommendation, and dragged out Dr. Seuss…at least she didn’t use Horton again…what IS her obsession with Dr. Seuss?? And, frankly, Seuss is tricky to read...do you remember all the invented words, the twisted rhymes? He's a challenge for any parent reading a good-night story, let alone a third grade reader. Come on, Dr. Baressi...give it a rest.

“Looking ahead, it is important now that we do everything in our power to make sure Oklahoma schoolchildren can read” Are you kidding? What does she think every Kindergarten, 1st, 2nd, and 3rd grade teacher has been doing this year? Just sitting around, waiting for her to inspire us?

There is no doubt. Our third graders can read, Superintendent. In spite of dwindling resources and larger class sizes. Not because of your mandates and requirements, but because that’s what teachers do.

What’s truly pathetic is you don’t even know that.
Posted by Fourth Generation Teacher at 9:52 PM