There will be a march for education on March 31 in Oklahoma....already the pushback from pundits and politicians has begun. Already the march has been portrayed as crassly stealing instruction time from our kids, as a grab for more money. Already they are trying to portray the 'union' involvement as discrediting us all.

Let me reframe this argument from my unique perspective.

I am a fourth-generation teacher in my family. Teaching is the family business. I fight as hard as I do to honor my dad and my grandmother and grandfather…The great grandfather I never knew is the first teacher on my mom’s side of the family.

I will be marching on March 31st for them. Let me introduce them to you. Look up at the picture above this post. That's my family.

Starting on the top left, is a highlight of my career…meeting Diane Ravitch. She signed her first book, Death and Life of the Great American School System, and we agreed that we were both old, we had big mouths, and we knew how to use them.

Next to us is a class picture of one of my mother-in-law’s, Esther, classes…She taught 2nd grade forever, teaching both of her own children in the process. Then, a picture of me in class, when I still pretended I was a brunette.

In the middle row is an old photo of my grandfather as a very young man. He had polio as a child and always limped. Not until my parents were expecting me did he learn his name, Claude, means “the lame one.” I was named to atone. Grandpa was a high school math teacher, the basketball coach, and the principal of a tiny school, New Lebanon High School, in Indiana. He kept meticulous notes of his plans each year, and my cousin and I have plans for that journal.

Next, a cousin shot…My sister, Jamie,  is standing on the left…she spent years as a kindergarten teacher. She taught primary classes in some of the toughest schools in Northern Indiana. Next to her, Annette, my cousin. Also an elementary teacher and elementary principal. My cousin Alyce next to me is a director of the nursing home my parents lived in…she is a teacher in a different way.

Bottom row? Daddy. John Lisman. My principal in junior high school. Hold onto that image for a moment. Your father as your principal! One day he subbed in my 7th grade English class. I am still traumatized! He had experience…his dad was his principal, and his grandmother was his English teacher. Dad was in a class of five or six students. I had Dad's high school diploma on my wall in my classroom...it was signed on the left, by his principal...his father. The two of them spend years together with me. 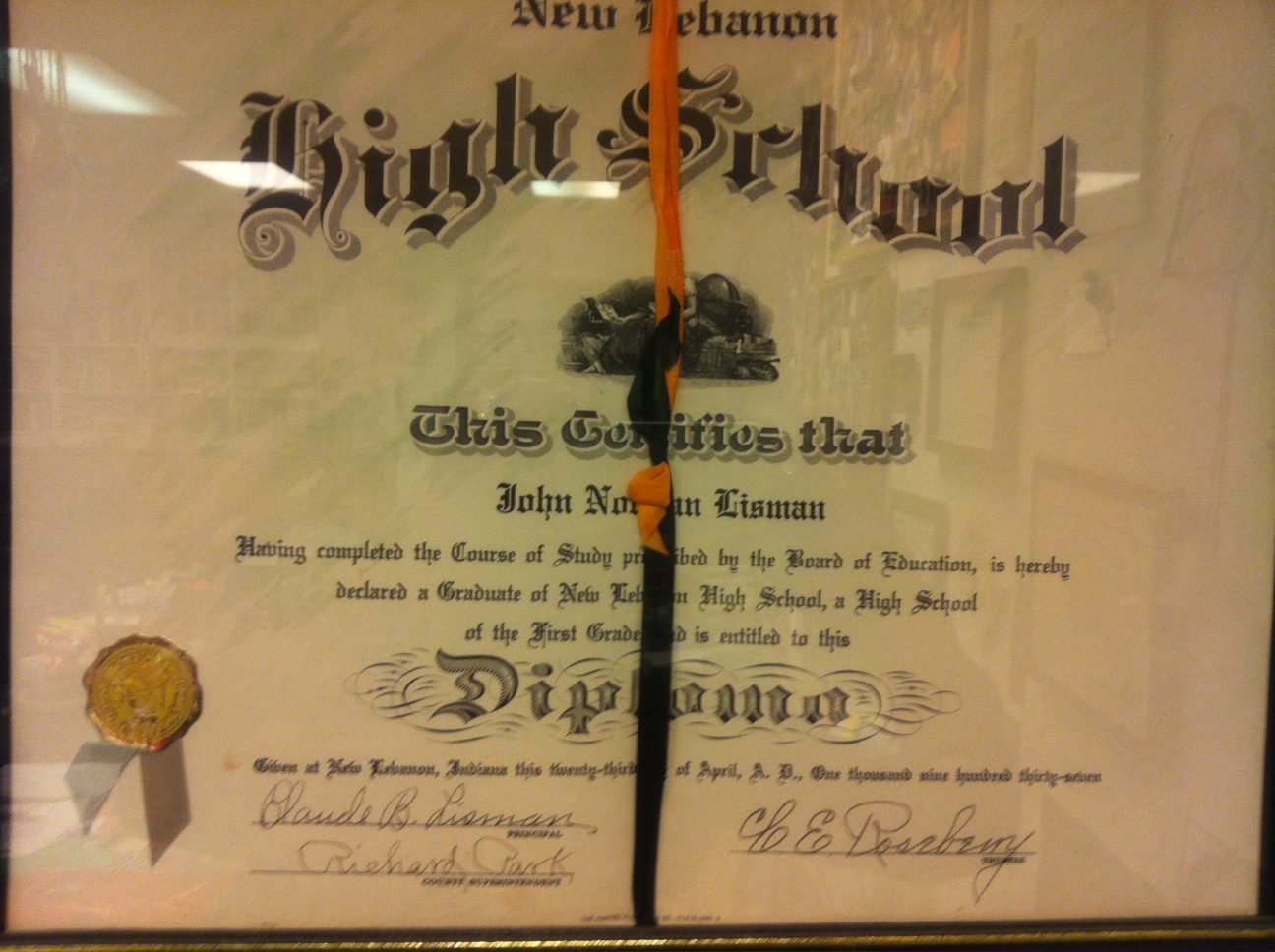 My unenviable position as principal's kid gave me a perspective on school politics and school workings that has helped me every day of my career. I saw my father agonize over salary and benefits negoiations. He was an educator to the heart, but he was also an administrator with requirements from above. I because sensitive to the tightrope principals are forced to tread. I can hear my dad's voice in my head as colleagues rail about administrators. I can step in and say, "Have you thought about..." and can sometimes turn the conversation to a more global look at an issue. I have appreciated that skill...one learned watching Dad try so hard to balance the needs of his students, his teachers, and his bosses.

Next to Daddy is my sister-in-law, Kathy, a music teacher, Bill, her husband and a history teacher, and on Kathy’s lap? Kristin…now a special education teacher. Next to them, a sweet picture of my dad and my sister, Jamie. Below them is my first class in Centerton, Indiana. 1968 or so. My degree was in English education, and there I was, teaching on an emergency certificate..teaching 6th grade, self-contained. An adventure for us all.

The last picture is of my grandpa, Claude and grandma Bess. She was the English department at New Lebanon.

I have four granddaughters, each of whom would make a great teacher…if the profession is still a profession when they grow up.

I hate when politicians try to bond with me by telling me their wife or mother or cousin was a teacher…Don’t insult me like that. They are NOT invested in this profession the way I am. Their one relative who used to be a teacher does not stack up against my family tree.

I share this to give you the background of why I will be in OKC on March 31. I will not be marching for more money, even though money is vital for our schools. I know the funding could be found if our politicians cared. What I do know is they’re trying to portray us all as greedy, money-grubbing teachers.

I’ll be marching to end the high-stakes in assessment. End the madness of testing every grade every year. End the test prep, hour after hour. End the narrowing of our curriculum to concentrate on the two high-stakes areas: math and science. I’ll be marching to put an end to un-funded and under-funded mandates that pile one on top of another, like, as Linda Darling Hammond has noted, layers of sedimentary rock…nothing ever taken away, just more piled on top. The Legislature must be put on notice that if they mandate something, they must fund it. I'll be marching to remind our Legislators that filing 500 bills, only 291 of which were labeled as education bills, is micromanaging of a profession with which most have no experience, except their years as students. I have written about the bills we know about here and here. I’ll be marching against the voucher bill, a not-so-subtle way of taking MORE money out of public schools. I’ll be marching for any of the bills that rein in the OSDE and its reckless behavior. I’ll be marching for the bill that will allow parents to opt out their children from testing.

The last time I visited with my 82-year-old father we found a little hole-in-the-wall lunch room in Southern Indiana. As we sat and drank really bad coffee, an equally elderly man approached my dad and asked, “Are you C.B. Lisman’s son? He was my geometry teacher. He helped me understand that class.” Then these two old men sat and laughed about their high school careers in tiny New Lebanon High School, their faces lit up while talking about a teacher. I want, years later, for my son and daughter-in-law to have that moment with a former student.

I want there to be a teaching profession for my Grands to join.