Vexatious! To the Max!

I have been watching in dismay as Oklahoma's A-F school grading system has exploded in our faces. Scores were released to districts, changed, changed again, and again, and again. Schools sat helplessly as their grades jumped up and down, right in front of their faces. When educators began questioning the grades, a real donnybrook broke out.

Policy makers spoke with arrogant disdain, blaming and threatening schools and educators: it's schools' fault; we'll cut your funding if you don't stop pointing out problems.Both our Superintendent of Public Instruction and Governor have responded with venom and a bad word. Grades like A-F are 'easy' to understand, the 'reformer's tell us. Everyone know what an "A" is. Well, maybe not. When the formula is so complex that the OSDE spent a week changing, rearranging, lowering, grades, must not be so simple. But that's their mantra. Easy-to-understand. Just hard to manipulate to get the grade they want, I guess.

I have read everything I can (yes, I am a reading teacher!). I read the OU/OSU report pointing out the inherent weaknesses of this, our second attempt to grade schools on test scores.This report, by research scientists from our two major universities, peer reviewed, has been dismissed by our leaders, because they 'don't believe' the foundations and the findings. Methinks they don't understand how education research works. Not a surprise, since neither our Governor nor our Superintendent is an educator.

Not being smart enough to write a proper critique of the system, I have come back to my own territory of asking why?

Why are policy makers going to this ridiculous extreme to 'hold schools accountable?'

And why are we misusing standardized tests to do something they are not designed to do?

The stars aligned this morning as I read the front page of our local newspaper. We have a 'Word of the Day,' and today's was 'vexatious' -- "troublesome, annoying...legal action instituted without sufficient grounds and serving only to cause annoyance." There is is. There's the answer to my first question...kinda sorta. 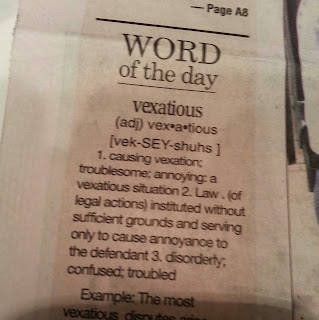 This rule, I absolutely believe, is designed to deflate grades for schools, to frighten parents who are traditionally happy with their neighborhood schools. If grades are artificially low, parents may panic and charters, online schools, parent triggers, and vouchers may be more attractive. Our current Superintendent of Public Instruction is on record as supporting charters and vouchers. Her proposed budget includes a 300% increase for Charter School Incentives, and only 4% increase of the school formula, money available to all the public schools in the state. Last year, cut scores on the Biology End-of-Instruction exam were lowered drastically, above the recommendations of the educator committee whose job -- they thought -- was to set the cut score. They made their recommendation, left, and were horrified to see their recommendations were ignored. It seems as if data is being manipulated, and money is being invested in line with our leader's priorities.

We fought last year's Parent Trigger bill, but we know it will reappear. DDS Barresi, our Superintendent, is enthusiastic about vouchers...but if the A-F can show dismal results of even strong suburban schools, perhaps support for her projects will increase.

So, in my mind, there's the 'why A-F?' To give the false impression that public schools are failing. How sad the push is coming from the Superintendent of Public Instruction. Shouldn't she be the elected leader protecting and advocating for our schools?

On to my second question, and the one that vexes me the most.

Why do we use/misuse/abuse standardized tests to torture out 'grades' that show whatever the manipulators of the numbers want them to show? Why do policy makers continue to ignore evidence that test scores are not, never have been, never will be, designed to evaluate teachers, or grade schools, or flunk our students.

Every adult has taken tests. We all did, we know what it feels like to sit and fill in bubbles at school. I think this fact works against those of us who are fighting the current testing climate. The tests we remember were not high stakes. The high stakes tests we have taken were choices -- ACT or SAT to get into college, GRE to continue into graduate school, professional exams to enter medical school or law school, tests to show proficiency in a chosen field of endeavor. We were not subjected to the battery of tests our kids are, with the consequences attached.

I've read numerous books about school reform, and two of my go-to books are The Myths of Standardized Tests and Reign of Error. I returned to these for evidence.

Standardized tests are a snapshot in time. They are not an accurate picture of learning, of teaching, or of achievement. They do not predict much more than a student's performance on her next test. But they're cheap to administer and score and report and they give the appearance of scientific measures. The authors of Myths quote Larry Barber: "More than once, I explained to legislators...as clearly and simply as I could, that standardized test scores were just too haphazard a measure to tell...whose school was better...in short they were a waste of good money that could have been better spent in interesting and innovative efforts to improve instruction...but no one wanted to hear that." Policy makers love tests...the tests they never took, the tests they'll never be held accountable for. The tests they gleefully pay for, instead of investing in our classrooms.

Test scores seem to have the veneer of 'objective' measures. So, policy makers love to use them, and say they're measures of learning and teaching. That's the foundation of A-F -- hold schools 'accountable' for learning by testing our kids. And testing. And testing. Tests do not measure learning. They do not predict learning. They predict the score on the next test.

Ravitch tells us, "The over reliance on and misuse of testing and data have created a sense of crisis, lending credibility to claims that American public education is failing and in decline...more testing does not make children smarter. More testing does not reduce achievement gaps."

It seems like even committed educators have stopped arguing that we are abusing the intent of the tests, as we also abuse our kids. I want that to be our call to action. No more high stakes tests. Period. Go back to the practices of our childhood: tests as one piece of information in a student's permanent file. One number that represents performance on one day, and will predict performance on the test next year. That is the proper place for standardized tests, not ruling education policy, flunking third graders, denying high school graduates their diploma, evaluating teachers, grading schools.

Until schools can be fairly evaluated based on their demographics, their instructional program, co-curricular programs, parent involvement, equity and access, and the well-being of our students, we must resist, both the use of high stakes testing, and the results of high stakes testing. We must trust parents to know what happens in our schools. We must strive for real school improvement, real professional learning, real student learning. Won't find any of that on a test.

Posted by Fourth Generation Teacher at 11:44 AM